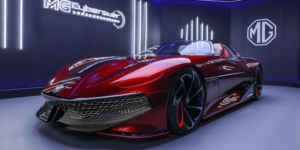 The British SAIC brand MG Motor confirms that it will build the MG Cyberster in series. MG presented the electric roadster initially as a concept at the Shanghai Auto Show in April.

MG Motors now confirmed the production plans not in Shanghai but through the Weibo account of the parent company SAIC. Apparently, preparations for series manufacturing are underway.

The green light hinged on a crowdfunding campaign. 5,000 interested parties have registered on the ‘MG CyberCUBE’ platform, depositing 1,000 yuan each, the equivalent of 128 euros. The five million yuan or 640,000 euros raised in this way will by no means finance the development but were apparently enough to signal SAIC that there’s interest in the vehicle.

The new electric car, the MG Cyberster, takes inspiration from MG’s classic roadsters but claims rather impressive specs and fancy interior. The concept cabin is equipped with a curved digital instrument cluster and a yoke-like steering wheel.

The two-door, two-seater MG Cyberster aims for a range of 800 kilometres (497 miles) and a sprint from 0 to 100 km/h in less than three seconds – at least these are the officially communicated key data for the study. The designers at the MG Advanced Design Centre in London still describe it as an “extremely exciting concept” and not a near-production study. MG Motors also has yet to disclose details about the powertrain and the timing and scope of production and pricing.

At the same time, the announcement of an electric sportscar from MG does not come as a complete surprise. There were already reports of corresponding product plans in January, only at that time the talk was of a sports coupe and not a roadster. The design renderings then seem much closer to series production than the Shanghai study with its folding headlights. MG calls these ‘Magic Eye’ headlights that open when switched on.

The company also announced plans to expand the range to cover Europe earlier in March. The all-electric SUV ZS EV is already available, with the MG EHS soon to follow. MG Motors further announced the SUV Marvel R Electric and the compact estate MG 5 Electric scheduled to sell on the continent.