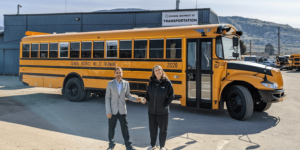 The delivery of the buses was undertaken by Western Canada Bus, which is an IC Bus dealership that has been partnering with British Columbia School Districts for the last two years to electrify their fleet.

Volkswagen and Navistar presented their electric school bus ChargE in 2018. Since then, Navistar founded a business unit for electric buses and trucks in 2019 and at the end of last year, the Volkswagen subsidiary Traton took over Navistar and expanded in North America.

IC Bus claims that their buses offer the longest range on a single charge in the industry, explaining that three battery options provide for a range between 70 miles (approx 113 km) and “upward of 200 miles” (around 320 km).

Making way for an increase in potential orders in Canada, the Québec government recently announced they would electrify most school buses – which is around 2,600 buses – by 2030. It is believed the local bus maker Lion Electric will be ahead in this competition since it is well known for its electric school buses and is based in Quebéc.

It seems there will plenty of North American custom to go around since a number of US states recently put in large electric bus orders. This includes the largest single electric school bus procurement in the USA so far in the Maryland country of Montgomery.

Meanwhile, IC Bus is accentuating its unique selling points, saying that IC Bus offers the only electric school bus with three levels of regenerative braking. This allows the bus to gather kinetic energy created from braking and use it to power the vehicle.

Hawaii to get government fleets off fossil fuels