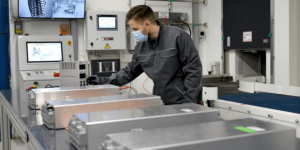 Volkswagen is considering an IPO for its new battery division. According to Chief Technology Officer Thomas Schmall, this does not involve individual plants but the entire cell business.

“We are not ruling anything out for the time being – at least for the cell business,” Chief Technology Officer Thomas Schmall told journalists. “A single cell plant could not be floated on the stock exchange, the whole thing must already be combined at a higher level.” Schmall says that VW is planning technology partnerships to reduce the costs of the battery factories and is also looking around for external capital providers.

But Schmall also notes that Volkswagen apparently do not want to hand over too much responsibility in Wolfsburg: “All of this will be so big and so crucial for our future viability that you have to think very carefully about how to do it economically.”

By 2030, Volkswagen plans to build six new giga-factories for cell production with its partners in Europe alone, at a cost in the double-digit billions, as the Group announced at its Power Day in March. According to Schmall, this is enough to equip more than five million cars with batteries. For China and the plants on the American continent in the USA and Mexico, further factories would probably be added if VW also wants to rely on the standard battery cell there.

But the group could also have a higher demand for Europe – for example for the commercial vehicle division Traton, which as reported relies mainly on batteries rather than the fuel cell even for long-haul trucks. “That’s on top of it. With the six giga-factories we cover the passenger car demand so far,” Schmall said. The truck cells will also be based on similar technology; according to Schmall, there are “many parallelisms in cell chemistry”.

Volkswagen is also preparing to enter the business of raw materials needed for cell production, he said. “We will also have to go in this direction – we are looking at the whole process chain from mine to recycling. We have to actively enter the raw materials business,” Schmall says. The group is currently preparing recycling on a larger scale in a pilot plant in Salzgitter.

The VW Group has high hopes for the development of solid battery cells with its US partner QuantumScape. “We expect to see the first pilot plants for series production in 2025 or 2026,” Schmall said.

However, in addition to its own production (partners such as QuantumScape and Northvolt included), Volkswagen also wants to continue sourcing some of the cells from external suppliers – i.e. companies that today sometimes also supply cells for the volume models but lose orders because of VW’s own production.

“We have to find a ‘cooperation model’ with these large manufacturers that gives us enough leeway. We want to produce cells ourselves, but at the same time we also want to source cells from outside,” says Schmall. “If we master the production processes ourselves, we become an integral part of the upstream raw material chain. And we make ourselves less dependent on the big cell suppliers. That is the basic idea that guides us.”

In principle, however, Schmall sees room for battery manufacturer Volkswagen alongside today’s top dogs such as LGES, Panasonic, CATL or SKI. “The market for batteries is becoming so large that this also creates additional space for a car manufacturer like Volkswagen,” says Schmall. He also sees himself well equipped for negotiations with cell manufacturers: “The size of the Volkswagen Group helps us here. With our twelve brands and ten million vehicles annually, we can make a stronger appearance.”

Mia 2.0 to receive batteries from InoBat