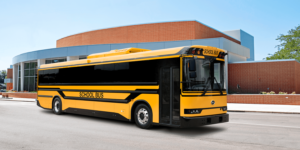 BYD is now entering the electric school bus business in North America. The model now presented is available in lengths of 35, 38 and 40 feet (10.7 to 12.1 metres) and offers space for up to 84 students.

The electric school bus, named ‘Type D,’ is powered by two wheel motors, and a lithium iron phosphate battery is said to provide up to 155 miles (249 kilometres) of range.

Interestingly, the Type D electric school bus is said to have bidirectional charging capabilities. This should allow the school buses to charge slowly at night when energy demand is low. BYD says that during school hours, the zero-emission energy should then be able to be fed back into the classroom.

To make the school bus as safe as possible, the Chinese company is installing an ESP, a 360-degree monitoring system for pedestrians and cyclists in the immediate vicinity of the vehicle, and a collision-avoidance system, among other features. In addition, there is said to be a function that monitors approaching traffic and warns students who have just exited the bus if it is unsafe to cross the road.

The electric school buses are most likely to be built at the Canadian assembly plant that BYD established in Newmarket back in 2019. BYD created this plant to serve the entire North American market.

The move into school buses comes at a time when the US government has prioritised the electrification of school bus fleets. The Canadian province of Québec has also very recently pledged to electrify most school buses by 2030. Needless to say, the BYD announcement of an electric school bus comes at a very opportune time, especially with the company’s Newmarket assembly plant. Just last month, BYD also announced an electric bus service centre on the US East Coast.