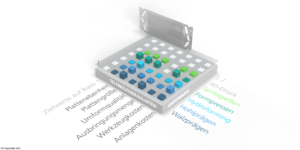 In Germany, the Fraunhofer Institutes IWU and IPT have started the development of a “virtual technology kit” for fuel cells. The intention is to provide users and interested parties with an overview of existing systems and technologies and to enable them to identify the appropriate production process according to their own needs.

In the production of fuel cells, clear structures and standards have been lacking up to now, the Fraunhofer institutes said in a statement. With the multitude of production technology options, it is therefore not easy for users and interested parties to maintain an overview and identify the appropriate production process according to their own needs. To address this problem, researchers at the Fraunhofer Institute for Machine Tools and Forming Technology IWU and the Fraunhofer Institute for Production Technology IPT are developing a virtual technology toolbox. According to the press release, this is supposed to help “make the optimal production decision in the manufacture of fuel cells”.

In order to optimise the forming process in the production of the bipolar plates, the IWU from Chemnitz and the IPT from Aachen are combining their existing expertise. “The companies that reach out to us are usually looking to invest in the production of fuel cells. They have some basic ideas about what the forming process will involve but are not sure what the economic consequences of using this process will be,” says Ulrike Beyer, head of the Hydrogen@IWU TaskForce. “For example, production rates and manufacturing costs are particularly difficult to assess.”

Depending on the customer’s focus – for example, equipment and tooling costs, production volume, size, flatness and flow field design – different forming processes may be the best fit. “While, for example, hollow stamping and hydroforming ensure a high quality of the bipolar plate, up to now only roll stamping has allowed a significant increase in output. But the latter still has its weaknesses in other areas,” says Beyer.

According to Christoph Baum, managing director of the Fraunhofer IPT, the starting material is also important. The composite materials that have been primarily used so far are too expensive for mass production. “In addition, with composite materials, the material thickness remains rather high, even after processing. This means any fuel cell stack quickly becomes very large, which makes them impractical for use in vehicles,” says Baum. “This has led to us increasingly using materials like steel, usually achieving better and more cost-effective results.”

Targeted consultations are already possible, according to a statement from the institutes. The Fraunhofer Institute for Manufacturing Engineering and Automation IPA is currently still building a website for the technology kit, which should be available “shortly”.