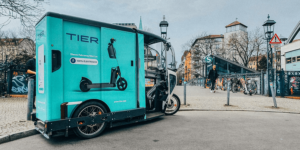 Micromobility provider Tier Mobility has secured additional capital to drive the expansion of its fleets. The Berlin-based company is receiving $60 million (49 million euros) in loan financing from Goldman Sachs.

The loan was apparently conditional on the previous $250 million financing round in autumn 2020, but Goldman Sachs also considered business performance in the Covid 19 crisis and winning tenders in London, Paris and Dubai.

“Tier has built a proven track record of profitable asset economics and asset longevity even in the midst of a global pandemic,” said Ben Payne, managing director at Goldman Sachs. “We’re excited to help the European leader extend sustainable mobility to more people around the world.”

According to Tier, this is the first time a micromobility company has received this level of loan financing. “The size of this highly scalable asset-backed debt facility is a groundbreaking innovation in micromobility that will accelerate our expansion and solidify our market leadership in Europe,” said Tier CFO Alex Gayer.

Tier says the funding will help it extend international coverage across strategic growth markets and enable increased investment in a multi-modal fleet of electric scooters, bicycles and mopeds. In addition, the new capital will drive the expansion of the Tier Energy Network. Here, battery charging stations will be installed at retail locations across Europe and the Middle East. These battery swapping systems will mean that Tier vehicles do not have to be recharged, but riders simply have to swap out the old battery with a fresh one. So far, the battery exchange is available in towns in Germany, France, Norway and the UK, with the company wanting to see “thousands of battery charging stations installed in businesses” over the course of this year. “We are bringing our unique Tier Energy Network to Berlin, Frankfurt, Munich, York, Bordeaux,” explained Philip Reinckens, VP & Regional General Manager DACH & CEE at Tier when the company announced its expansion in early May this year.

For the batteries in its vehicles, Tier formed a partnership with Northvolt announced in February this year. Here, the aim is to improve the sustainability of electric scooter batteries and their raw material requirements, as well as improving sustainability by means of battery swapping stations and recycling. At the time, Tier Mobility said that it will install 4,500 battery-swapping stations at local partner companies across Europe.