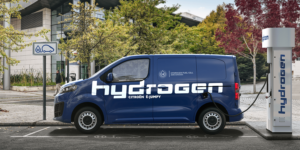 After Opel and Peugeot presented their fuel cell versions of the Vivaro and e-Expert van models, Citroën is now following suit with the ë-Jumpy Hydrogen. It adopts the technology of the other two models.

The ë-Jumpy Hydrogen follows the battery-electric ë-Jumpy, which Citroën introduced last year. While the BEV variant is already being delivered, the carmaker plans to deliver the fuel cell version to the first fleet customers this autumn.

The production of the vehicles will take place in Valenciennes, France, before the electric transporters are then converted in Rüsselsheim. No coincidence: Opel’s headquarters is also where the sister model Vivaro-e Hydrogen and Peugeot e-Expert Hydrogen are manufactured. In addition, the global “Hydrogen & Fuel Cell Competence Centre” of the parent company Stellantis is also located there.

The technical features of the new Citroën van are quickly listed. They correspond one-to-one to the data sheet of the Opel and Peugeot models. The model comes in M and XL lengths (4.95 and 5.30 metres) and has a hydrogen fuel cell drive with an externally chargeable battery on board. It combines the familiar 100 kW drive from the Stellantis Group with a 45 kW fuel cell from Symbio and a high-voltage storage unit with an energy content of 10.5 kWh. Tanks for storing up to 4.4 kilograms of hydrogen are installed in the underbody of the van.

While the fuel cell is supposed to provide continuous power, the battery switches on when there is a short-term need for more power – for example, when accelerating. With its 10.5 kWh, it is more than just a small buffer battery. In addition, as already mentioned for the FC Vivaro, the battery can also be charged by cable – at 11 kW in 60 minutes – unlike most FCEVs. The battery itself is installed under the front seats and is essentially familiar from plug-in hybrid models.

The ë-Jumpy Hydrogen will also boast identical values for its body, although Citroën did not explicitly mention this in their release. The load volume of the Opel and Peugeot models is 5.3 cubic metres for the small versions and 6.1 cubic metres for the large ones. Peugeot, for example, stated a payload of up to 1,100 kilograms and a towing capacity of 1,000 kilograms. The latter information had been missing at the presentation of the Opel counterpart.

Prices were not yet announced prices for the ë-Jumpy Hydrogen.