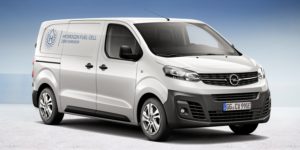 After the Stellantis Group announced that three electric transporters from Opel, Peugeot and Citroën would also be offered with a fuel cell system this year, Opel has now presented its variant: The Opel Vivaro-e Hydrogen has a hydrogen fuel cell drive with an externally chargeable battery and is said to be able to travel more than 400 kilometres on one tank of fuel (according to WLTP).

The Vivaro-e Hydrogen is based on the Vivaro-e Cargo battery-electric van and adopts the familiar 100 kW powertrain used in numerous PSA models. The FC van will only be available in M and L lengths (4.96 and 5.30 metres). The S length (4.60 metres) is missing here – as this version has a shorter wheelbase. Opel also only offers the 50 kWh battery in the S, while the longer M and L versions are also available with 75 kWh.

The additional space is taken up by the hydrogen tanks installed in the underbody instead of the 75 kWh battery. The tanks hold 4.4 kilograms of hydrogen and should provide a range of around 350 kilometres. The tanks come from the French supplier Faurecia, the fuel cell from Symbio; a joint venture founded by Faurecia and Michelin in 2019. 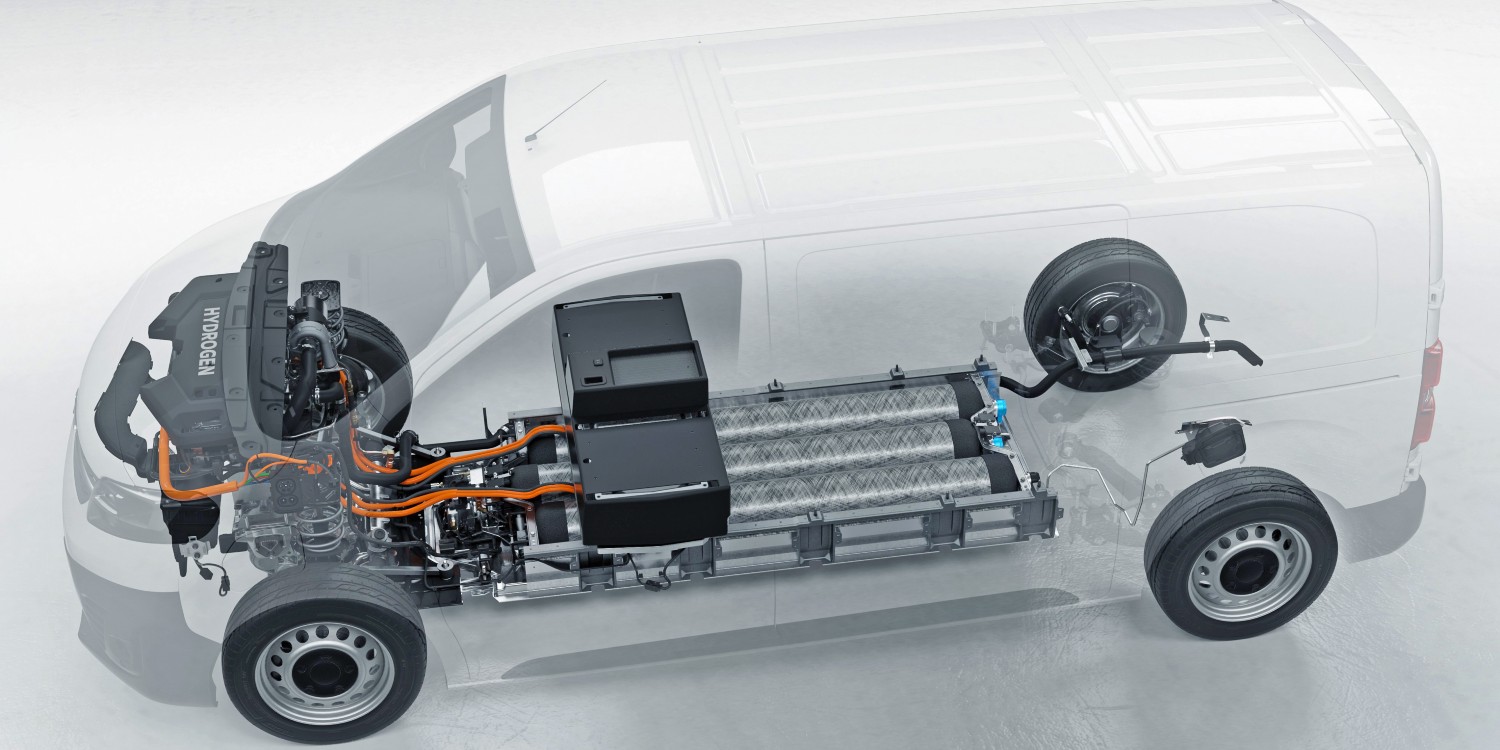 No performance data was provided on the fuel cell at the original announcement, so Opel is now catching up on this. According to Opel, the Symbio development is said to have an output of 45 kW, “enough power for continuous driving on the motorway”. The short-term power demand during acceleration (which can quickly reach 90 kW and more in a vehicle of this size, depending on the load) is covered by the battery.

In the Vivaro-e Hydrogen, this is more than just a small buffer battery; the high-voltage storage unit has an energy content of 10.5 kWh. In addition, unlike most FCEVs, the battery can also be charged by cable at 11 kW in 60 minutes. The battery itself is installed under the front seats and is essentially familiar with plug-in hybrid models. However, this does not make the Vivaro-e Hydrogen a plug-in hybrid. By definition, a hybrid requires two energy storage systems (battery and fuel tank) and two separate drives (combustion engine and electric motor). The Vivaro-e does not fulfil the latter requirement, as the drive is provided exclusively by the electric motor. In this case, the term “plug-in fuel cell concept” chosen by Opel is correct.

The concept of a large buffer battery and a fuel cell, whose output is significantly lower than the drive power, is expected by the Rüsselsheim company to ensure gentle operation: the fuel cell system always works under optimal operating conditions increases the service life.

While the battery-electric Vivaro-e Cargo either has to be charged overnight or has to be taken to a fast-charging station from time to time (45 minutes to 80 per cent with the large battery), Opel sees the hydrogen version as the ideal solution for customers who want to cover long distances with their van without emissions or who are dependent on fast refuelling at the filling station due to their business model. This should take three minutes, according to the manufacturer.

“Hydrogen could be the central element of an integrated and efficient energy system of the future, free of fossil fuels,” says Opel CEO Michael Lohscheller. “We have more than 20 years of experience in hydrogen fuel cell vehicle technology. There is hardly another propulsion system in the world that offers the combination of zero emissions, long driving range and only three minutes refuelling time.”

Depending on the length chosen, the load volume is 5.3 or 6.1 cubic metres, the same as the battery or diesel version. Opel specifies the payload as up to 1,100 kilograms. Opel does not provide any information on the towing capacity of the FC Transporter in the press release.

The Vivaro-e Hydrogen is manufactured at Opel Special Vehicles (OSV) in Rüsselsheim. The global “Hydrogen & Fuel Cell Competence Centre” of the parent company Stellantis is also located at the Opel headquarters.

Opel has not yet announced prices for the Vivaro-e Hydrogen.