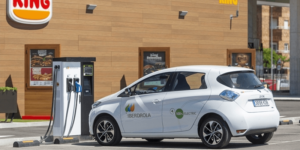 The Spanish energy supplier Iberdrola has reached an agreement with the company Restaurant Brands Iberia (RB Iberia) to install 400 charging points for electric cars at almost 200 Burger King and Popeyes shops in Spain. Later, the cooperation could be extended to Portugal.

The agreement that has now been concluded is exclusive for the next ten years, meaning that no charging points from other operators may be built at RB Iberia. Iberdrola will take over the installation and operation of the charging points. Customers will be able to use the chargers via the Iberdrola Public Charging App, which will also be used for billing.

According to the Iberdrola announcement, RB Iberia also plans to install up to 100 charging points per year at newly built restaurants. However, the possible expansion to Portugal in a second step is only mentioned in the communication and not backed up with exact targets.

Alfonso Calderón, commercial director of Iberdrola Spain, described RB Iberia as an “excellent ally to move forward in implementing solutions for the electrification of transport”.

Iberdrola has not yet confirmed exactly which charging points will be installed at RB Iberia. However, a clue could be given by a notice that Iberdrola published one day before the deal with RB Iberia: The energy company has procured the first 1,000 units of the Supernova fast charging station from the Spanish charging infrastructure manufacturer Wallbox. Launched last autumn, Supernova is Wallbox’s first fast charging station for public charging in cities. Iberdrola is Wallbox’s largest shareholder.