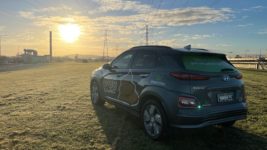 “On average, one person’s daily habits can generate enough electricity to make the car travel around 450 metres,” a spokesperson for Urban Utilities said. The electricity is produced by biogas from sewage treatment which is fed into a cogeneration unit at the wastewater treatment plant. It takes 150,000 litres of sewage to power one full charge of the car, which gets a range of 450km.