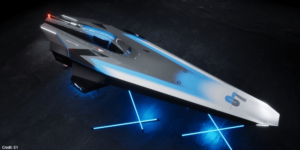 After Formula E founder Alejandro Agag announced a new racing series with electrically powered racing boats last year, the creators of the E1 series have now presented the concept of an electric hydrofoil boat called “RaceBird”. The first races are to be held in early 2023.

The first races are planned in one and a half years. The initiators are assuming up to twelve teams, each of which is expected to acquire two boats: one for “solo events” of the E1 in European ports and one for races to be held in remote locations around the world as part of the Extreme E supporting programme. There is talk of probably at least ten races in 2023, at least five of which will be in the slipstream of the Extreme E.

As in Formula E, energy management is to play an important role in the maritime races by only allowing an amount of energy tailored to the track. Thus, not only driving skills and risk should lead to a good result, but also the particularly efficient use of energy. The races will be held in a knockout mode.

Agag is also relying on a concept familiar from Formula E and Extreme E in other ways for the racing boat series: namely on standardised vehicles that are branded and marketed by the teams. The boats are designed by the company SeaBird Technologies. A digital design was shown first, the first prototypes are to be built in the coming months. However, Agag and his co-initiators revealed during the current presentation that the “RaceBirds” will weigh 800 kilograms, be seven metres long and three metres wide including the wings. And thanks to a carbon-fibre chassis, they are supposed to reach speeds of up to 50 knots (93 km/h). In concrete terms, the hull lifts out of the water at a certain speed, while a U-shaped wing carries the boat. With the so-called foil, the frictional resistance of the hull decreases enormously, which is how the top speed is supposed to be reached.

The values differ significantly from those that were mentioned when the series plans were announced in September 2020. At that time, it was said that the racing boats would weigh only 380 kilograms and reach speeds of up to 60 knots (111 km/h). They are not quite that compact and fast after all.

Another new feature is that charging stations are to be set up at all stations on the E1 calendar. The infrastructure will be financed together with the Saudi state fund PIF, which the series organisers introduced as a shareholder of the series. The Union Internationale Motonautique (UIM) is acting as patron of the E1.

” gives me great pleasure to welcome on board PIF as a new partner in this exciting venture,” Agag cites. Like Formula E and Extreme E, the E1 Series will generate attention for electric technologies. “To get the backing of PIF at this early stage of development emphasises the importance of our mission to electrify marine mobility. With the new design of the RaceBird boat you see today, we hope to accelerate change in the marine industry and provide sustainable solutions for future leisure craft,” says Agag.