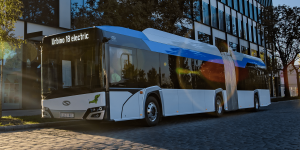 In Germany, the city of Mainz’s municipal utility subsidiary Mainzer Mobilität has ordered twelve battery-powered electric articulated buses from the Polish manufacturer Solaris for delivery to Mainz in the first quarter of 2022. In addition, an option has been agreed upon for a further eleven vehicles that could be delivered by the end of 2022.

The procurement of 23 electric buses has been planned for some time by the transport company in the capital of German Rhineland-Palatinate. At the end of 2019, the German Federal Ministry for the Environment promised the Mainz company funding of around 10 million euros for the 23 articulated electric buses and charging infrastructure with a total volume of circa 23 million euros. Solaris has now won a Europe-wide tender against five competitors. The twelve articulated buses that have now been ordered are the New Solaris Urbino 18 electric.

According to a statement by Mainzer Mobilität, the 18-meter-long vehicles will have a range of more than 200 kilometres “even in winter”. However, concrete performance data on the buses destined for Mainz are not mentioned. As far as the equipment is concerned, it is only stated that the vehicles will have a heat pump, an enclosed driver’s cab and USB charging sockets in the passenger compartment, and will be given an eye-catching exterior and interior design in the future.

Despite the federal subsidy, MVG will still incur five million euros in additional costs compared with the purchase of diesel buses. The purchase of the vehicles is therefore a financial feat, it says. The option for a further eleven buses is supposed to buy time to obtain additional funding from the state of Rhineland-Palatinate. A corresponding application has been made, but the answer is still pending, according to Jochen Erlhof, managing director of MVG.

Currently, four Sileo battery-powered buses are already in regular service for Mainz Mobility. The total fleet of the municipal utility subsidiary consists of about 140 buses. In 2029, according to earlier information from the public transport company, up to 100 electric buses could then already be on the road in Mainz and almost half of these would be fuel cell buses. However, an initial joint order by the cities of Frankfurt, Wiesbaden and Mainz for eleven fuel cell buses from ebe Europa as part of the H2Bus Rhein-Main project fell through in mid-January 2020 because the vehicles could not be delivered. In the current announcement, Mainzer Mobilität has not mentioned fuel cell vehicles.

“Together with our parent company Mainzer Stadtwerke, we are committed to climate-friendly public transport in the city of Mainz and the surrounding area, within the scope of our financial possibilities,” Erlhof is quoted as saying in the press release. The procurement of battery buses is also based on the new EU ‘Clean Vehicle Directive’. Here, clean vehicles in the case of buses and trucks means “any truck or bus using one of the following alternative fuels: hydrogen, battery electric (including plug-in hybrids), natural gas (both CNG and LNG, including biomethane), liquid biofuels, synthetic and paraffinic fuels, LPG.” Quotas for “clean” vehicles will be specified for new vehicle procurements in urban public transport in the future: From August 2021 until the end of 2025, at least 45 per cent of new procurements must be “clean” vehicles, and from 2026 onwards, at least 65 per cent must be “clean” vehicles. “In this respect, we are already meeting EU requirements before the deadline. And with the streetcar, which carries around 38 per cent of passengers, the proportion of electromobility in public transport in Mainz is already very high today,” says the MVG managing director.