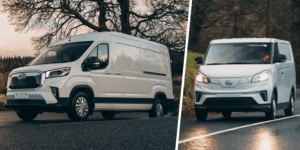 In the UK, DPD is adding 750 electric vehicles to its fleet. The parcel delivery company has ordered the new electric delivery vans from the SAIC brand Maxus. These are 500 units of the electric 3.5-ton eDeliver 9 and 250 units of the smaller eDeliver 3.

The new vehicles will nearly double DPD’s electric fleet in the UK to just under 1,500 vehicles. Even so, this is to be just an interim stage: By the turn of the year, DPD already plans to operate more than 1,700 e-vehicles in the UK. In autumn 2020, the Group announced its intention to have zero-emission and low-emission delivery vehicles in service in 225 of Europe’s largest cities by 2025.

For the Maxus vehicles now on order, DPD will procure the long-wheelbase eDeliver 9 in two battery versions: with 72 kWh and with 88 kWh. DPD says the 88-kWh version can travel more than 200 miles (approx. 320 kilometres) on a single charge. The UK is the first market in which the Deliver 9 with electric motor is available, while the electric van should reach Germany, for example, in the second half of 2021.

The Chinese company’s eDeliver 9 is a 3.5-ton truck that will basically be offered in two lengths (5,546 mm and 5,940 mm) and three battery versions. In addition to the battery variants mentioned, the vehicle is also available with a smaller 52-kWh battery. The electric drive has 150 kW, with torque at 310 Nm, and a top speed of 100 km/h. The eDeliver 9 has a maximum loading volume of eleven cubic meters, and the maximum payload is 1,200 kilograms. The manufacturer puts charging time at 6 hours for the 52-kWh battery and 8 hours (AC) or 40 and 45 minutes (DC; 0 to 80% SoC) for the larger batteries.

Like the Maxus EV80 which is the third electric van from the Chinese company, the smaller eDeliver 3 was already revealed at its market launch in Germany. Unlike the eDeliver 9, which is the offshoot of a combustion engine, the eDeliver 3 was planned from the outset as a purely electric vehicle. The agile van comes with two battery options. The manufacturer says that the specifications for Germany are as follows: The small battery with 35 kWh allows a range of 150 kilometres (long version of the vehicle) and 158 kilometres (short version) according to WLTP. With the larger battery with 52.5 kWh, it goes up to 230 kilometres (long version) or 240 kilometres (short version), according to the manufacturer. However, the manufacturer emphasizes that the inner-city range according to WLTP could be up to 342 kilometres. All versions of the vehicle have an electric motor with 90 kW and 255 Nm of torque on board. The top speed is capped at 120 km/h.

A 7.2-kW onboard charger allows a full charge in six to eight hours on an appropriate AC charger, depending on battery size. Via fast charge, the vehicle is 80 per cent charged in 45 minutes. Other important specifications for the commercial vehicle sector: The eDeliver 3 offers two seats, has a load volume of 4.8 to 6.3 cubic meters and allows a maximum payload of 1,020 kilograms. The long version can load three euro pallets, the short version two. The maximum towing capacity (braked) varies between 120 and 440 kilograms, and the turning circle between 11.7 and 13.1 meters. Users of the new Chinese electric vehicle can choose between two driving modes and three energy recovery levels on the road.

Overall, DPD Group is pursuing the goal of reducing last-mile CO2 emissions in the 225 largest European cities by 89 per cent and pollutant emissions by 80 per cent compared to 2020. In October last year, Group CEO Boris Winkelmann said “Our long-term goal is to build on this first ambitious plan (…) and become completely CO2-free in our last mile activities within the next 20 years.”