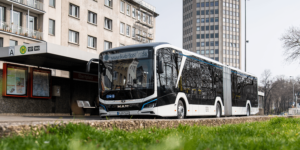 According to Volkswagen-owned MAN, the vehicle for Cologne, Germany was the first delivery of the company’s own electric articulated bus. From the beginning of April, the Lion’s City 18 E will be used by the Cologne public transport company (KVB) on line 127, which is one of the longest lines in the KVB bus network.

According to Kuchta, a second articulated bus is soon to be delivered in Barcelona. The vehicles in Germany and Spain are part of a field trial. “Working together with transportation companies, we aim to gather extensive experience, which will then be used to continually improve our city buses,” says Rudi Kuchta Head Business Unit Bus at MAN Truck & Bus.


The first examples of the series-produced version built in Poland will go to Nuremberg in Germany. At the beginning of this year, VAG Verkehrs-Aktiengesellschaft Nuremberg ordered 28 MAN Lion’s City 18 E buses in addition to eleven Lion’s City 12 E buses. For MAN, this was the largest electric bus order to date and the company’s first order ever to include articulated e-buses.

The Lion’s City 18 E will be able to carry up to 120 passengers. The drive is provided by two electric central motors on the second and third axles that produce 320 kW to a maximum of 480 kW. Eight batteries on the roof of the articulated bus give a total capacity of 640 kWh. MAN says it uses NMC cell technology from the group’s modular system. The manufacturer puts the range of the Lion’s City 18 E at 200 kilometres or up to 270 kilometres under favourable conditions over the entire service life of the batteries.