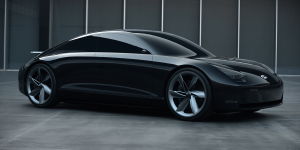 Hyundai will soon convert its plant in Asan, South Korea, for the future production of the all-electric Ioniq 6, according to a local media report. The plant already produces the Sonata and Granduer combustion sedans.

The carmaker plans to close the plant in Asan for about a month during the summer holidays from July to August, reports the Korea Herald. Anonymous Hyundai representatives told the newspaper that a second two-week rebuilding phase could follow in November.

However, despite the tight time frame until July, the rebuild is probably not yet finalised. “The idea of suspending the Asan plant and converting it into an EV manufacturing facility is still in progress, with details yet to be confirmed,” one of the sources said.

The Ioniq 6 will be a mid-size e-sedan and is said to be inspired by the ‘Prophecy’ concept car. At the end of May, the South Korean Group had first officially confirmed that the model would be launched in 2022 – followed in 2024 by a larger electric SUV called the Ioniq 7. It seems unlikely that with a 2022 market launch in June 2021, a plant for production has not yet been specified.

The plant has a maximum production capacity for 300,000 vehicles per year. The Hyundai models Sonata and Grandeur are currently built there. Industry observers are widely in agreement that Hyundai is likely to cut production capacity of the Sonata, whose sales have fallen sharply recently, in favour of the Ioniq 6.

Lee Hang-gu, an analyst at the Korea Automobile Technology Institute, also thinks it is likely that the Ioniq 6 will be built in Asan. “The Ioniq 6 will be similar in size to Sonata, which will make it easier for the company to switch production lines,” the analyst said. Moreover, LG Energy Solution’s Ochang plant is located near Asan.

The Ioniq 5, the first Hyundai model on the 800-volt E-GMP electric platform, is built at the Ulsan plant. However, production there has been repeatedly interrupted due to the global chip shortage and strikes by the union, according to the Korea Herald.