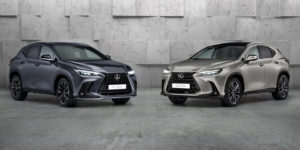 Until now, the only electrified version of the Lexus NX has been a full hybrid. This will change with the second generation of the compact SUV model, which is scheduled for market launch in the fourth quarter of 2021: From then on, the NX will also be offered as a plug-in hybrid.

NX has now revealed the second generation of the NX. It will go on sale as a full hybrid, as well as a plug-in hybrid, which is a first for the brand. There will no longer be a combustion engine version option.

The PHEV version will be launched exclusively with all-wheel-drive in the form of the NX 450h+. The 306 hp plug-in hybrid drive with a 2.5-litre petrol engine and two electric motors is already familiar from the Toyota RAV4 PHEV and Suzuki Across PHEV. The 18.1 kWh battery in the Lexus NX 450h+ is said to provide a purely electric range of 63 kilometres – at speeds of up to 135 km/h. Lexus will announce prices shortly before launch.

The full hybrid version NX 350h without external charging option for the battery will in future produce 242 hp, 22 per cent more than its predecessor. It will be offered with either front-wheel or all-wheel-drive. In terms of design, there are moderate changes. The second generation of the compact SUV is two centimetres longer, two centimetres wider and 0.5 centimetres higher than the current version. The wheelbase grows by three centimetres. While the designers have almost only touched up the light signature on the outside, the changes in the interior are more extensive. Among other things, there is now a digital cockpit. In addition, the new NX comes with more safety assistants as standard.

Lexus plans to introduce 20 new or revised models by 2025, including more than ten electrified models (BEV, PHEV and HEV). By that time, all Lexus models will have electrified variants, of which the brand plans to sell more than its petrol counterparts.

Like Toyota’s first BEV model, the production version of the Lexus Stromer will be based on the e-TNGA modular platform developed specifically for battery-electric vehicles. Toyota presented a preview of its future BEV model in April with the bZ4X Concept. Subaru’s first electric SUV Solterra will also use Toyota’s e-TNGA platform or its counterpart e-SGP (e-Subaru Global Platform).