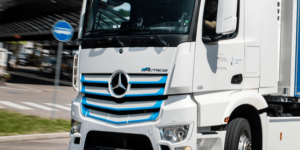 Several years of testing of the eActros prototypes are drawing to a close. On 30 June, Mercedes-Benz Trucks will present its battery-electric truck for heavy distribution transport. The start of series production is planned for the second half of the year at the German plant in Wörth am Rhein.

The production model of the eActros will be presented on 30 June by Karin Rådström, Member of the Board of Management of Daimler Truck AG responsible for Mercedes-Benz Trucks, and Andreas von Wallfeld, Head of Sales & Marketing at Mercedes-Benz Trucks, who will reveal all the technical data as well as digital services and advisory offers for customers. The event will be digitally broadcast.

Mercedes-Benz presented the concept of a heavy-duty electric truck back in 2016. Two years later, the further developed prototypes went into customer testing. Mercedes-Benz tested a total of ten eActros prototypes in recent years, both in Germany and in other European countries. The vehicles were used as 18- or 25-tonne trucks in two test phases by almost 20 test customers.

The pre-series models were powered by two electric motors. They each have an output of 125 kW and a maximum torque of 485 Nm. A total of eleven lithium-ion battery packs with a total capacity of 240 kWh supply the electric motors with power. But all the ancillary units – in addition to the aforementioned air conditioning system, for example, and the power steering – are also electrically powered. Mercedes specifies the DC charging power as a maximum of 150 kW, a charging process should then take around two hours.

“The eActros that we will now unveil is the final result of all the experience we gained on the road and on test rigs,” says von Wallfeld. According to the press release, the vehicle is “in no way inferior to a conventional diesel truck in terms of availability and performance in urban traffic, on highways or on overland routes.” Compared to the prototypes, the production eActros will be “clearly superior” in features such as range, drive power and safety equipment, the release continues. The vehicle will also be embedded in a holistic ecosystem that includes advisory services for customers on all aspects of e-mobility.

In September last year, Daimler Truck AG, which plans to spin-off from Mercedes-Benz AG (passenger cars and vans) by the end of the year, also gave a preview for the first time of a purely battery-electric long-distance truck: the Mercedes-Benz eActros LongHaul, which is to be ready for series production by 2024 and cover around 500 kilometres on one battery charge.

Recently, Daimler Trucks also started intensive testing of the further developed prototype of its fuel cell truck GenH2 Truck, which was presented in September 2020. The prototype is still on the road on a test track, but soon it will also be on public roads.

Daimler wants to achieve ranges of 1,000 kilometres and more with the GenH2 Truck. This will be made possible not only by the fuel cell but also by the use of liquid hydrogen cooled to -253 degrees Celsius. This makes it possible to achieve higher energy densities than with high-pressure storage of gaseous hydrogen.

“We are consistently pursuing our technology strategy in the electrification of our trucks. Our goal is to offer our customers the best locally CO2-neutral trucks based on batteries or hydrogen-based fuel cells, depending on the application,” said Martin Daum, Chairman of the Board of Management of Daimler Truck AG.

Daimler Truck is pursuing a sustainable corporate strategy and has the ambition to only offer new vehicles that are CO2-neutral in operation (“tank-to-wheel”) in Europe, Japan and North America by 2039. By 2022, the vehicle portfolio of Daimler Truck AG in the main sales regions of Europe, the USA and Japan should already include series-produced vehicles with battery-electric drive. From 2027 onwards, the company also plans to supplement its vehicle range with series-produced vehicles with hydrogen-based fuel cell drive. CO2-neutral transport on the roads by 2050 is the ultimate goal.