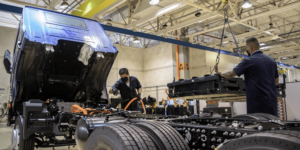 Volkswagen Caminhões e Ônibus (VWCO) began series production of its first all-electric truck in Brazil on Monday. The South American brand is manufacturing the e-Delivery distribution truck in the Brazilian city of Resende and initially plans to produce 1,000 to 3,000 units per year.

After an extensive test phase, VWCO has now started series production of the e-Delivery at its plant in Resende in the Brazilian state of Rio de Janeiro. The truck is intended for urban distribution transport and is scheduled for market launch in July. The Ambev brewery has been announced as a customer so far. Volkswagen Caminhões e Ônibus plans to announce further customers at the time of market launch.

The e-Delivery receives batteries from CATL via the Brazilian importer Moura. According to an earlier report, the batteries use so-called “cell-to-pack” technology: the cells are integrated directly into the battery pack. So far, the cells are first installed in modules (for example 12 cells in one module), the modules in turn are combined to form the complete battery packs. The intermediate step of the modules is to be eliminated with the new technology – and with it some components.

To keep the supply routes short, battery partner Moura has installed a presence at the plant in Resende. VWCO has been using this model, called Consórcio Modular, for a long time: nine suppliers share responsibility with VWCO for the assembly of vehicles within the plant, including Maxion (chassis and wheels), Meritor (metal suspensions and axles), Powertrain (engines) or Kroschu (interior fittings). Moura’s entry into this system will extend the principle to the brand’s electric trucks under the slogan e-Consórcio. In collaboration with CATL, Moura will be responsible for various processes related to e-mobility, such as the assembly, parameterisation and testing of the e-Delivery’s electrical systems, according to an accompanying press release.

“25 years ago, we developed the production process of the Modular Consortium and now, we crown this trajectory with another pioneering achievement: the manufacture of electric vehicles, alongside important partners such as Moura. Together, we will advance in the development of the electric mobility in Brazil,” underlines Roberto Cortes, President and CEO of Volkswagen Caminhões e Ônibus.

Originally, the e-Delivery was to be launched worldwide as an 11- and 14-tonne truck as early as 2020. The launch has therefore been delayed somewhat. The distribution truck had already been unveiled in 2018. The e-Delivery is expected to have a range of more than 200 km thanks to an internally developed drivetrain in combination with CATL batteries, with engine power of 260 kW and a maximum torque of 2,150 Nm. The Brazilians also promise fast-charging capability: specifically, they are talking about 15 minutes of charging time to recover 30 per cent of the battery capacity and three hours for 100 per cent. The brand also emphasises the modular design of the truck: the front module contains the driver’s cab, the centre section the batteries and the rear section the drive train. This ensures that the various components can be flexibly combined.

The first interested party for the electric truck is the Brazilian brewery Ambev. It plans to add a total of 1,600 electric trucks from Volkswagen Caminhões e Ônibus to its fleet by 2023. The first 100 e-Delivery are to be handed over to Ambev this year.