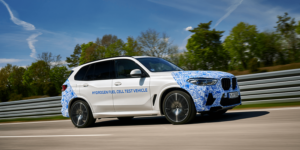 The BMW Group has started everyday testing of the i-Hydrogen Next prototype. The vehicle is powered purely by electricity and uses hydrogen as an energy carrier. The company now wants to gain practical experience in a wide-ranging field trial.

The interaction between the drive, the model-specific chassis technology and the vehicle electronics systems will be tested under realistic conditions, as the company explains in a press release. The testing programme is intended to create the conditions for being able to present a small series of the model developed on the basis of the BMW X5 at the end of 2022.

According to BMW, the central element of the new test phase is the fine-tuning of the software that controls all driving and operating functions. Previously, the fuel cell system, the hydrogen tanks, the power buffer battery and the central vehicle control unit had already been tested “in hundreds of test runs on test benches”.

The overall drive system of the BMW i Hydrogen Next combines hydrogen fuel cell technology with fifth-generation BMW eDrive technology, as already available in the BMW iX3. Energy generation in the fuel cell produces 125 kW of power. An electrical converter located below the cell adjusts its voltage level to that of the electric motor, which provides the vehicle’s drive. A power buffer battery provides additional energy for acceleration manoeuvres, for example, giving a system output of 275 kW. The energy stored in the power buffer battery is recovered by means of recuperation during overrun and braking phases.

The hydrogen required is stored in two 700 bar tanks made of carbon fibre reinforced plastic (CFRP). Together they hold six kilograms. According to the company, the hydrogen tanks can be filled within a few minutes. With a full charge, the vehicle can cover a range of several hundred kilometres.

The BMW i Hydrogen Next uses fuel cells from the product development cooperation with Toyota Motor, which has been in place since 2013. The individual cells of the fuel cell come from Toyota. The fuel cell stack and the overall drive system were developed by the BMW Group.

For the assembly of the small series, the carmaker is working together with the Landshut Lightweight Construction and Technology Centre (LuTZ), which is to manufacture essential components of the hydrogen drive for the BMW i Hydrogen Next and provide them for the further assembly of the fuel cell system in Munich. Preparations for the fuel cell system are already underway in Landshut.

For the small series, the Bavarian plant will manufacture components for the FC assembly: the so-called stack housing made of light metal, in which the fuel cells are located, as well as the media pressure plate. This consists of plastic and light metal castings and serves as an airtight and watertight seal for the stack housing. Through the media pressure plate, the “media” hydrogen, oxygen and coolant are introduced into the housing to initiate the chemical reaction in the fuel cells.

According to BMW, hydrogen fuel cell technology has the potential to complement internal combustion engines, plug-in hybrid systems and battery electric vehicles. “Hydrogen fuel cell technology can be an attractive option for sustainable drive trains – especially in larger vehicle classes,” says Frank Weber, Member of the Board of Management of BMW AG for Development.

Polestar 3 to be manufactured in the USA