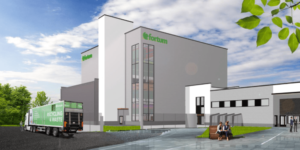 Fortum will expand its lithium-ion battery recycling capacity by building a new plant in Harjavalta, Finland. The new plant, which will cost Fortum about 24 million euros, will recycle rare metals and other materials from old EV batteries using hydrometallurgy.

The company considers the investment a “major step” to increasing its hydrometallurgical recycling capacity and enabling the production of sustainable battery chemicals. Fortum already operates such a pilot plant on an industrial scale at the Harjavalta site.

The new facility, says Fortum, will enable the company to recycle the “major part of the EV batteries reaching their end-of-life in Europe” and help recover scarce metals from old electric vehicle lithium-ion batteries while also recycling various waste fractions derived throughout the battery supply chain.

The start of operations is set in 2023, and Fortum expects to recycle a large proportion of end-of-life electric vehicle batteries in Europe by then. “The new facility in Harjavalta will create approximately thirty jobs in the near future, but its impact will be felt throughout Europe as it will be the largest facility in the market of its kind once completed,” says Kalle Saarimaa, Vice President, Fortum Recycling & Waste.

The company says it combines mechanical and low-CO2 hydrometallurgical technologies to recycle batteries as sustainably as possible and with the lowest possible carbon footprint. The lithium-ion batteries are first disassembled and processed in a mechanical process at Fortum’s facility in Ikaalinen. The black mass of the battery, which contains critical metals, is then collected and transported to Harjavalta for hydrometallurgical processing. Fortum says the combination helps achieve a recovery rate of up to 95 per cent of those metals contained in the active materials.

Hydrometallurgy is a technique within extractive metallurgy, the obtaining of metals from their ores, and involves using aqueous solutions for the recovery of metals.

In March, Fortum’s hydrometallurgical battery recycling operations were identified as one of four Fortum projects shortlisted for the EU’s Innovation Fund for low-carbon technologies. The four projects made it through to a shortlist of 70 candidates for financing from the EU’s one billion euro first Innovation Fund. Fortum has also received IPCEI (Important Project of Common European Interest) grants from Business Finland in conjunction with the EU Commission’s European Battery Innovation project. The grants were given in conjunction with Fortum’s mechanical recycling plant in Ikaalinen, Finland and the hydrometallurgical recycling plant in Harjavalta.

Separately, in March 2020, Fortum signed a memorandum of understanding with BASF and Nornickel to establish a battery recycling cluster to serve the electric vehicle market.