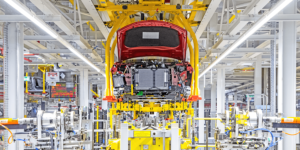 Stellantis reports extensive work at Opel’s headquarters in Rüsselsheim, Germany, to implement the electrified EMP2 platform. This will allow Opel/Vauxhall to introduce a second production shift in Rüsselsheim, which is scheduled to start in autumn this year.

The flexible Efficient Modular Platform 2 (EMP2) will be used for C- and D-segment vehicles and enables pure combustion engines and electrified vehicles to be produced on the same line. Stellantis says that the platform’s high level of modularity and variable chassis parameters will allow a diversity of model variants and, therefore, great freedom in brand differentiation. The models built on this platform include the electric version of the new Opel Astra, for example, and several other cars and vans from the former PSA family.

Stellantis says they invest a “significant amount in the millions” in Rüsselsheim to implement the EMP2 platform but have not been given an exact figure. Extensive work is to be carried out in all areas of the plant. Changes include the body shop and paint shop where the two-colour painting is being set up. The so-called 3-Wet process is being introduced, which Stellantis describes as a “particularly emission-saving painting process.” Extensive changes are also being made in the final assembly, including new marriage and chassis lines.

The Rüsselsheim plant will also see the introduction of extensive driverless transport systems for material delivery processes. In addition, all models produced in Rüsselsheim are also to be tested on a completely new test track. According to Stellantis, the far-reaching innovations also include the plant’s IT systems and logistics processes.

With the implementation of the EMP2 platform, the plant will introduce a second production shift in autumn, creating around 300 additional jobs in the final assembly line this year. To fill this second shift, employees will be moved from other areas of the company that are underutilized.

Stellantis, the new automotive group created in January 2021 through the merger of PSA and FCA, says it currently has around 30 electrified models and plans to rapidly expand its range of electric and hybrid vehicles: The number of electrified models is expected to rise to 39 by the end of 2021 alone.