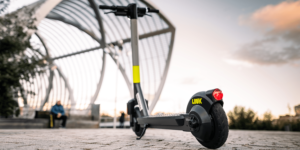 Superpedestrian is massively expanding its e-scooter sharing Link in Europe and added nine cities in just three months. By the end of this year, the MIT spinoff targets to roll out its kick scooters in 30 European cities.

After launching the service as Link in Rome last September, Superpedestrian added cities in Austria, Italy, Portugal, Spain and Sweden in quick succession. The Spanish cities of Madrid and Alcalá de Henares followed first in 2020.

This year, nine new cities in Austria, Italy, Portugal, Spain and Sweden signed the Link scooter-sharing within three months. Starting in March, Superpedestrian e-scooters began operating in three new cities, including Aprilia and Turin in Italy and Malaga in Spain. They were joined by Palermo in early April, and later that month, Vienna became the home of Superpedestrian’s 30th fleet of shared e-scooters globally. Further launches recently took place in Stockholm, Lisbon and several Spanish towns.

When announcing the latest expansion, Superpedestrian Vice President EMEA Haya Douidri took it as “confirmation that Superpedestrian’s shared e-scooters are now really taking off in Europe.”

Superpedestrian was originally known as the MIT-developed Copenhagen Wheel retrofit kit manufacturer, which turns any bicycle into an e-bike.

The company has since launched the Link e-scooter with a view to safety and reliability. Superpedestrian emphasises eight years of development and advanced AI, resulting in a so-called Vehicle Intelligent Safety system (VIS).

Onboard software, combined with five processors and 73 sensors, allows VIS to detect and respond to hazards in milliseconds as the system runs 1,000 “vehicle health checks” every second to prevent component failures and to remove vehicles from service if it detects vandalism damage or anti-social behaviour. Other useful features for cities include Composite Geofencing, Safe Stop and Ground Truth Mapping.

At present, Link e-scooters can be found in 30 cities globally.