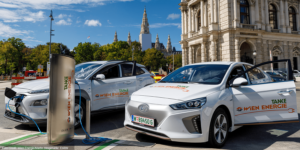 Austrian utility Wien Energie has completed the largest roll-out of public charge points in Vienna to date. On behalf of the City of Vienna, the company has been expanding the charging network to 1,000 stations over more than three years.

The installation of 1,000 public charge points in Vienna, which started in early 2018, has now come to an end, following earlier news of progress in 2020. The last charging point of this programme went online at the beginning of June.

However, the City of Vienna wants to expand the charging infrastructure further. For the time being, it announced at least 200 more “demand-oriented” public charging points. Ulli Sima, City Councillor for Innovation, Urban Planning and Mobility, when announcing the news, added that 70 per cent of citizens in Vienna were already choosing climate-conscious options, including bikes and public transport. She expressed hope that the new stations would increase electric car uptake further.

This year alone, drivers in Austria registered 12,000 electric vehicles. Using the charge points in the capital, drivers doubled the charging sessions from January to May, and Wien Energie says the charge points have been used 320,000 times since installation began in 2017.

Drivers may use the Wien Energie card or app at any partner charging station in Austria.

At the same time, Wien Energie sees its public charging points primarily as a “basic charging network” and says more than 90 per cent of the charging processes were already carried out at home today. The energy supplier, therefore, not only welcomed the subsidies for the construction of private infrastructure that were increased in July 2020, but also the announced change to the residential property law, which is to include a “right to charge” in future. It was otherwise complicated in Austria to set up a charging point in a communal garage in multi-party buildings.

Austria had used the corona crisis to push for e-mobility. The country also remains on ‘mission2030‘ to decarbonise the energy and transport sector across Austria within the decade.