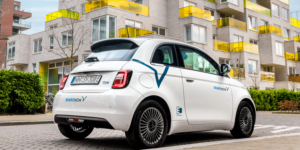 The car-sharing provider Share Now adds the all-electric Fiat 500e to its fleet in Hamburg and adds 100 units of the small electric car. Users in Amsterdam and Copenhagen have been using the Fiat 500e since March 2021.

In Hamburg, the Fiat cars join two other fully electric models – the Smart EQ Fortwo and the BMW i3 – both coming from ShareNow’s initial founders, Daimler’s former Car2Go and BMW’s DriveNow services. By the summer, Share Now says it will have a total of up to 500 electric vehicles on the roads of Hamburg.

Share Now says electric car bookings in Hamburg from January to May 2021 increased by 25 per cent compared to the same period in the previous year. In the period under review, Hamburg’s residents also used the electric vehicles for 13 per cent longer.

The Hamburg data follow an earlier announcement when Share Now provided insights into usage statistics of electric vehicles in its European car-sharing fleet. From January to May 2021, the average time spent renting an electric car from Share Now across Europe increased by 23 per cent compared to the previous year.

The company now operates over 3,000 BMW, Mini, Smart and Fiat electric cars at four exclusively electric and four mixed fleet locations. Share Now exclusively relies on electric vehicles in Stuttgart, Amsterdam, Madrid and Paris, while it uses a mix of electric and conventional cars in Hamburg, Munich, Copenhagen and Budapest. Share Now says that the electric vehicles distributed among these eight locations account for a quarter of the total fleet.

When looking at usage data, customers make around 11,000 electric trips per day. “Around 600,000 customers rent an electric car every eight seconds,” the company says.

Share Now was born in 2019 from the merger of BMW’s DriveNow with Daimler’s Car2go service.

Fiat presented the New 500 as designed electric from the ground up in 2020. The company has since pledged to become an all EV brand by 2030. “This will be a radical change for Fiat,” CEO Olivier François then announced on the eve of World Environment Day 2021. The goal, he said, was to use falling battery costs “bring to market electric cars that cost no more than those with an internal combustion engine.” Our recent review found the electric Fiat a rather excellent electric car in its segment and proof that small cars do not need combustion engines.