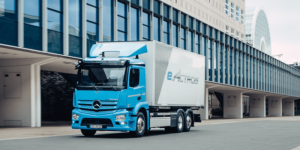 Mercedes-Benz Trucks today presented the series version of the eActros. The battery-electric truck for heavy-duty distribution has noticeably improved performance data compared to the prototypes that were tested by customers for a good two years. Series production is scheduled to start in the second half of the year in Wörth.

Let’s get straight into the datasheet of the eActros: The technological heart of the electric truck is an electric rigid axle with two integrated electric motors and two-speed transmission. The two liquid-cooled motors generate a continuous output of 330 kW and a peak output of 400 kW. The energy storage of the series model consists of either three or four battery packs placed in the underbody, each with 105 kWh. The maximum battery capacity is thus 420 kWh, which is supposed to provide the aforementioned range of up to 400 kilometres.

Important for logistics companies: The eActros is available as a two- and three-axle vehicle with a gross vehicle weight of 19 and 27 tonnes respectively. Mercedes Benz Trucks puts the permissible gross weight with trailer of the standard eActros at 40 tonnes. In addition, the noise level is only 60 dB, which also makes night deliveries possible. The manufacturer also emphasises that numerous assistance systems and technical devices in the eActros are intended to ensure a high level of safety, including features such as MirrorCam as standard equipment.

The standard eActros can be charged with up to 160 kW – and thus 10 kW faster than the previous pre-series models. In the configuration with three battery packs (315 kWh), the charging process from SoC 20 to 80 per cent can be completed in just over an hour, according to the manufacturer.

Since Mercedes-Benz Trucks believes that the purchase of an eActros is only the first step towards emission-free transport, the company provides logistics companies with a supplementary consulting and service package, including digital tools, for the switch to e-mobility. This ‘holistic ecosystem’, as the manufacturer calls it, is intended to help integrate the eActros into the fleet, guarantee high vehicle utilisation and optimise the total cost of ownership (TCO).

According to the Stuttgart-based company, the final specifications of the production model are based on all the findings from the ‘eActros innovation fleet’ launched in 2018 and the resulting close exchange with customers. Mercedes-Benz had a total of ten eActros prototypes tested in Germany and other European countries. The vehicles were used as 18- or 25-tonne trucks in two test phases by almost 20 test customers.

“We have to acknowledge that transport is a part of the problem when it comes to climate change. At the same time, we can and we will be part of the solution,” says Karin Rådström, Member of the Board of Management of Daimler Truck AG, responsible for Mercedes-Benz Trucks, at the virtually broadcast vehicle unveiling. “We start with our eActros that has covered more than half a million kilometres on public roads. The eActros and its dedicated services are a big step for Mercedes-Benz Trucks and for our customers towards CO2-neutral transport!”

Series production is now scheduled to start in the second half of the year at the plant in Wörth am Rhein. In assembly, the electric truck models will roll off the line alongside trucks with conventional drives. However, flexible production has recently necessitated intensive preparations, such as the construction of a new assembly line for the installation of the high-voltage components (including the installation of the battery packs assembled in Mannheim). The eActros vehicles will then be reintroduced into the regular production process for finishing and final acceptance.

Volvo Trucks reveals specs for the FH, FM and FMX