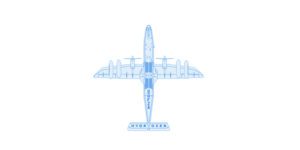 ZeroAvia has expanded its hydrogen-electric aviation programme to include 19-seat aircraft and has also been able to raise an additional US$13 million in funding. Two of the 19-seaters will be built initially – one each in the UK and the US.

Last year, ZeroAvia took to the skies with the first flight of a six-seat H2 aircraft based on a converted Piper as part of the HyFlyer project supported by the British government. At the time it was announced that the next step would be to convert an aircraft with ten to 20 seats.

For the next phase of the research and development programme called HyFlyer II, the company is now converting two 19-seat Dornier 228 aircraft. Both aircraft were previously in commercial regional service.

The Dornier 228 is a twin-engine turboprop built by the German manufacturer Dornier in Oberpfaffenhofen between 1981 and 1998. This will distinguish the HyFlyer II, which has been converted to fuel cell propulsion, from the single-engine Piper. ZeroAvia claims 600 kW of power for the new propulsion unit, compared to 250 kW for the HyFlyer I. The HyFlyer II will be powered by a fuel cell.

The HyFlyer II will have two of these 600 kW units mounted on the wings instead of the turbines. The hydrogen tanks will be able to store up to 100 kilograms of compressed hydrogen. For the planned start of commercial operations in 2024, ZeroAvia wants to achieve a range of 500 miles (about 800 kilometres) with this amount of hydrogen. However, the propulsion solution has not yet been certified.

“Hydrogen is the only practical solution for true climate-neutral flight, and it will become a commercial reality much sooner than many predict,” says Val Miftakhov, founder and CEO of ZeroAvia.

ZeroAvia was also able to generate a further US$13 million in capital from investors. Just in June, the company closed a $24.3 million funding round to accelerate the development of larger hydrogen engines for aircraft with more than 50 seats. The other $13 million will also go towards this large engine development programme, the company said.

In addition to existing investors, new backers have also joined Rude. These include technology investor AP Ventures. “We have been impressed with the progress that ZeroAvia has made over the last 24 months—technically, operationally, and commercially,” said Kevin Eggers, partner at AP Ventures. “Furthermore, we have become increasingly confident about the significant role of hydrogen in decarbonising aviation. We believe that ZeroAvia will pioneer the development of hydrogen-electric powertrains for the aviation space.”