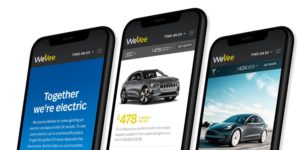 The British electric car leasing platform WeVee has closed a seed financing of seven million dollars (just under six million euros). The company intends to use this to finance its expansion into continental Europe.

WeVee launched in the UK in March 2020 and describes itself as the “first fully integrated electric vehicle leasing platform.” According to the company, 100,000 users from the UK visit the website every month. The available vehicles include more than 50 models from 30 brands, from the likes of Tesla, Mercedes and Jaguar, as well as emerging brands such as Polestar and Rivian.

With the income from the financing, WeVee says it will expand to Germany during the course of this year, followed by expansion into France, Italy and Spain in 2022. The platform’s palette of vehicles is also to be expanded, with commercial vehicles, motorcycles, scooters and related services.

WeVee founder Paul Fagan has more than 20 years of experience in the British leasing industry. He says “With battery technology changing so rapidly and new car prices fluctuating, being an electric vehicle owner is risky. But so many people want to be part of the e-revolution. We’re making that happen.”

German investors Rahmyn Kress and Michael Perschke got on board as co-founders and board members in this pre-seed financing stage. Kress is a former Chied Digital Officer at Henkel. “We are building WeVee to be the Airbnb of e-mobility,” says Kress. “The future of transportation is electric, and we will be the first solution for anyone who wants easy access to transportation they know is clean and good for society. There’s no better foundation to build this on than what WeVee has designed for EV leasing.”

Perschke was most recently co-founder and CEO of the Pininfarina Automobili brand but has since left there to become an angel investor. “WeVee is set to become a real game-changer – if we build out the model as we intend to, we will help companies provide easy and cost-effective e-mobility solutions to their employees, as well as tracking and improving their carbon footprint,” says Perschke.

The completed financing, in which other investors also participated, values the company at £10.1 million (about $14 million or 11.9 million euros).

The British publication AMOnline notes that, according to the car leasing comparative website leasing.com, the demand for electric cars has overtaken demand for diesel-powered cars for the first time in the UK. The leasing industry has been identified by a number of governments as being a good way to quickly increase the second-hand electric vehicle market as well as quickly getting zero-emission vehicles on the road.

Earlier this year, electrive.com interviewed Sandra Roling from EV100 from The Climate Group about the role of leasing companies in the transport transition. British WeVee competitor LeasePlan is an active member of EV100, an initiative that encourages companies to pledge to transition their fleets off fossil fuels.  She said she sees great potential in leasing companies “because they work towards a long-term vision and they have a lot of impact in terms of educating customers, and leasing companies are able to purchase vehicles in bulk.”