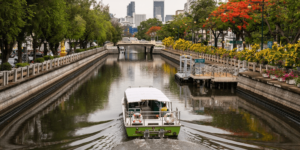 The twelve new electric ferries join the existing fleet of seven Torqeedo-powered electric boats that entered service in December 2020. Both orders are as part of a city-wide plan to reduce traffic and emissions, Torqeedo said.

The ferries are not new but have been retrofitted. As part of the work, the old diesel outboard engines and tanks were removed. Instead, the boats are now powered by two ‘Torqeedo Cruise’ outboard motors with ten kW. According to the manufacturer, these draw their power from four “Power 48-5000” lithium-ion batteries.

The ferries are to be used in the daily shuttle service in the city centre; they can each transport 30 passengers. Part of the fleet will also be used on the city’s waterways, which connect the Chao Praya River with Prachinburi province via a 72-kilometre canal.

“With the expansion of the fleet of electric ferries, Bangkok is well on its way to achieving the ambitious goal of becoming the Electric Transportation Capital of Asia,” says Joe MacDonald, sales manager of Torqeedo Asia Pacific Ltd. “The electric commuter ferries will be part of an interconnected electrified transportation network that also includes electric buses, monorail trains and the conversion of hundreds of Bangkok’s iconic three-wheeled tuk-tuk taxis.”

Thailand is indeed on the verge of a rapid shift to electric mobility. Torqeedo’s announcement cites the government’s goal of converting at least 30 per cent of the transport system to electric propulsion by 2035. At least for the road sector, this target is more radical: From 2035, only purely electric cars are to be allowed to be newly registered. By 2030, electric drives should already account for 50 per cent of new passenger car registrations.