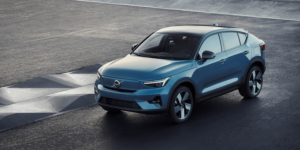 Volvo Cars has opened the order books online for the C40 Recharge at an MSRP of $58,750 in the United States before tax credits. Vehicle production will begin in Ghent, Belgium, this autumn, with the first US deliveries being set for Q4 2021.

The Volvo C40 Recharge was introduced in March this year and celebrated it’s market launch in Norway in June.

It features one 150 kW electric motor each on the front, and rear axles bring the C40 to a system output of 300 kW. The electricity is stored in a 78 kWh battery. While the XC40, which weighs around 2.2 tons, has a range of 418 kilometres according to WLTP, Volvo states a range of 420 kilometres for the 4.43-meter-long C40. However, at the time, it was said that the range could still be increased in time via a software update.

In other news, Electrify America announced an agreement with Volvo to provide drivers of the all-electric XC40 Recharge and upcoming C40 Recharge with 250 kilowatt-hours of complimentary charging on its ultra-fast DC charging network. “Increasing access to fast and reliable charging is critical to the adoption of battery electric vehicles,” said Anders Gustafsson, President and CEO of Volvo Car USA. “Our collaboration with Electrify America ensures our drivers will be able to enjoy the benefits of an electric car whether they are taking short trips or long journeys.”

Ford is offering a new Mustang Mach-E variant in China

Mercedes rumoured to present the EQG at the IAA