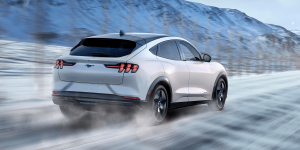 In Norway, some of Ford’s first EVs have stopped without warning. Six cases are known so far. The affected owners were driving on a steep road and experienced a sudden stop of their electric car after a longer phase of downhill recuperation.

Ford is hoping a software update will suffice to solve the issue, responding that the “Mach-Es essentially experienced too much regen braking, resulting in the vehicles’ batteries getting too hot.” Ford director for Norway Anne Sønsteby said: “We have been made aware of a very small number of Mustang Mach-E in Norway, where the electric motor has stopped on steep downhills. There is a software update available for customers at all our resellers that addresses this issue. Alternatively, customers can also get their Mustang Mach-E updated with a Power-Up via OTA updates that will be available as part of our next 21B update – which will take place in September/October this year.”

Rivian riding the hype around Bezos going to space