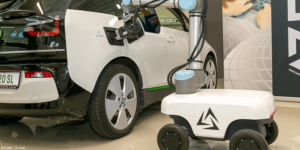 Together with the Austrian companies Alveri and Arti Robots, TU Graz has developed a fully autonomous and mobile charging robot. The prototype independently finds its way to the parked electric car, where a robot arm guides the charging cable to the charging port and docks it there.

After the charging process, the robot unplugs itself and moves away from the vehicle. The initiators demonstrate the entire process in a video (in this article below). Meanwhile, the prototype is not to be the end of the story: The Upper Austrian start-up Alveri wants to produce charging robots for electric cars in series in future. However, according to the partners, some optimisations are still to be made before the charging robot is ready for series production.

For now, two components merge into one unit: a mobile platform that can move autonomously in space and an automated robot arm that plugs the charging cable into the car. Arti Robots is an expert in the former, and Graz University of Technology also has experience with charging robots, albeit so far more in stationary versions. Alveri, a start-up for sustainable mobility services, is acting as the initiator and financier of the project – and, as mentioned, wants to leap into series production of the charging robots.

“The refuelling or charging process of a vehicle is not much of a challenge for humans. For an automated system, on the other hand, it is a very complex, millimetre-precise matter,” explains Bernhard Walzel from the Institute of Automotive Engineering at TU Graz. The demonstrator orients itself independently in space and moves at up to 20 km/h towards the vehicle. The robot arm mounted on the torso then handles the charging process.

The partners see applications for mobile charging robots primarily in multi-storey car parks, on park-and-ride lots or in larger business parking areas. However, the charging robot is still a long way from being ready for series production. For example, it is currently still connected to the power cable. Since, according to the project partners, the integration of a drive battery does not make sense for reasons of weight and cost, but above all, from an ecological point of view, they are tinkering with a power supply via ground contacts. Furthermore, the software for controlling the robot also still needs to be integrated. At the moment, it runs on a separate PC.

In addition, the demonstrator still operates with a conventional collaborative industrial robot arm, which “can do more than is necessary”. In this respect, the development team sees potential savings in weight and costs with a robot arm designed purely for charging. Legal and safety-relevant questions would also have to be clarified because “the robot will move in an area where people are on the move. Confidence in the system’s safety is, therefore, a basic prerequisite,” says an accompanying press release.

Interfaces are also an issue. Bernhard Walzel: “An incredible amount has happened in recent years in the development of e-vehicles, the necessary infrastructure, charging options and automated systems. It would now be important for the individual systems to communicate with each other. At the moment, we still have to signal to the robot which car it should charge by opening the ‘filler cap’. The goal must be for the vehicle to signal its need for charging to the robot independently. Or that the driver activates a robot via an app. There will be a lot of movement in the near future.”

The vision of the charging station coming to the vehicle is not only inspiring the Austrian project partners. Aiways, VW and its American subsidiary Electrify America, the ChargePal research project and Innogy are also working on similar concepts.

Shell Recharge coming to Waitrose stores across the UK