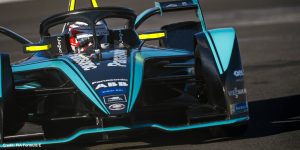 Jaguar Land Rover officially announces the long-term continuation of its Formula E commitment. When the technologically refreshed Generation 3 cars make their debut at the start of the 2022/23 season, Jaguar Racing will once again be represented by two electric racers.

Jaguar Land Rover is now the sixth manufacturer to commit to Formula E in the long term, after Porsche, Nissan, Mahindra, DS Automobiles and Nio. In the future, the Jaguar Racing team will continue to rely on the support of Williams Advanced Engineering. The racing team describes Formula E as “a real-world test lab to make progress on the future of electrification.”

After Audi and BMW each announced their withdrawal from Formula E after Season 7, citing limited and, in their view, insufficient development work, JLR takes a different view. As the official manufacturer team of Formula E, Jaguar Racing can develop its own powertrain, which includes the engine, transmission and inverter. The ongoing commitment will help Jaguar Land Rover develop new sustainable technologies (…) and support the “Jaguar Renaissance” as an all-electric luxury brand from 2025, says an accompanying statement.

Briefly for context: Formula E and the FIA are currently working together to shape the Gen3 era. The focus is on bringing a new generation of technology to the start – both “in sporting terms and with a view to the future of electric mobility”. The third generation of Formula E racing cars is expected to bring performance and efficiency benefits, including more powerful and lighter cars. In qualifying mode, 350 kW will be available instead of the previous 250 kW, and in normal racing mode it will be 300 kW (previously 200 kW). The race cars will also get an electric all-wheel braking system, which is intended to recover energy even more efficiently: up to 600 kW at all wheels. Work is also being done on fast-charging technology: During pit stops, the Gen3 cars will be able to recharge with up to 600kW.

“The Gen3 era of Formula E is an exciting new chapter for the all-electric World Championship,” expresses Thierry Bolloré, CEO of Jaguar Land Rover. Already today, Formula E represents the perfect environment to develop and test new sustainable technologies in a very short time. “Jaguar Racing will not only play a role in the renaissance of Jaguar as a pure-electric luxury brand, but across the entire electrified Jaguar Land Rover ecosystem, helping to deliver our sustainable future and our digital transformation. ”

Faraday launches on the US stock market