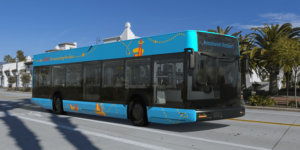 The Anaheim Transportation Network (ATN) has chosen Arrival to replace Liquefied Natural Gas (LNG) buses with Arrival’s battery-electric buses. For funding, ATN has been awarded a two-million-dollar grant from the Federal Transit Administration (FTA) in partnership with the city of Anaheim, California.

ATN operates on a goal to run a zero-emission bus fleet by 2025. “This investment brings us that much closer,” said Diana Kotler, ATN Executive Director, when announcing the deal with Arrival. The latter is a (formerly) hidden champion of e-mobility. Headquartered in London, UK, Arrival now lists as British American EV maker – the latest since UPS became an investor and ordered 10,000 electric vans as reported.

Arrival uses local Microfactories which utilise the company’s in-house technologies, including software, hardware and robotics. The buses for ATN will be made in Arrival’s first such Microfactory in the US, in Rock Hill, South Carolina. The company also runs a facility in Charlotte, North Carolina, and says it intends to deploy Microfactories all over the country.

The order from ATN, however, is the first e-bus order for Arrival in the US. “We are so pleased that ATN has chosen Arrival to support its transition to an entirely electric bus fleet and have been impressed with its commitment to sustainability, including its solar-powered charging depot,” said Mike Ableson, Arrival CEO.

Ableson is referring to a depot installation funded through the California Energy Commission. CARB had awarded a $5 million grant to that end in March, which ATN uses to acquire charging stations, batteries, and solar infrastructure, including multiple Tesla MegaPack battery energy storage systems. ATN’s facilities are in Anaheim, near Los Angeles.

While not stated specifically, the five Arrival e-buses will likely use said charging stations once they hit the roads of Anaheim. ATN’s e-bus fleet will then comprise ten electric vehicles out of a fleet of 81.

ATN and Arrival have not stated a delivery date not whether there is an option for more e-buses in future. Potentially, Arrival’s South Carolina factory can produce up to 1,000 electric vehicles per year.

Arrival demonstrated the e-bus concept in June 2020. Through utilising low-cost materials, simpler assembly processes and, above all, smaller and lighter batteries, the vehicle cost significantly less than current battery-powered buses, according to the manufacturer.

Founded in 2015, the company also runs offices in Luxembourg, Germany, Israel, the Netherlands and Russia, with more than 1,900 global employees. Apart from the two Microfactories in the US, Arrival is also building capacity in Bicester, UK and Madrid, Spain.