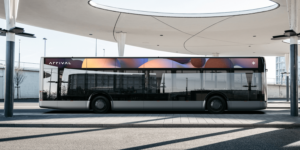 British EV developer Arrival has announced its first micro-factory in the USA. It is under construction in York County in the state of South Carolina and scheduled to produce electric buses from the fourth quarter of 2021. The talk is of 1,000 battery buses per year.

However, if the term micro-factory makes you think of a small production facility, the capacity of 1,000 buses per year should be the limit. In South Carolina, Arrival plans to employ 240 people when it opens; according to current information, the investment in the micro-factory amounts to 46 million dollars (39 million euros). Compared to a conventional commercial vehicle plant, these are relatively manageable figures.

The plant will build a battery-electric bus with a subway-like interior. Arrival demonstrated the concept in June 2020. With low-cost materials, simpler assembly processes and, above all, smaller and lighter batteries, the vehicle will cost significantly less than current battery-powered buses, according to the manufacturer.

The micro-factory concept is made possible by the construction method: The body is built so that welding work with expensive production robots becomes obsolete. A painting line is also not required, since they produce the panels of the outer skin from a special combination of a composite material with a low-cost thermoplastic – similar to an e.Go Life vehicle, the plastic itself is colored, not the body.

Arrival is excited to announce that our first US Microfactory will be based in Rock Hill, South Carolina.

However, the electric transporters from the bulk order Arrival received from UPS are to be built in England for the time being, where Arrival moved into its production plant in Bicester in March. Nevertheless, it seems possible that the company will set up further micro-factories in the USA. North American CEO Mike Abelson spoke on the occasion of the announcement of the “beginning of a paradigm shift in the EV sector”.

The Rock Hill factory Arrival says it plans to start production in the second quarter of 2021, with production starting in the fourth quarter of the same year. Since new jobs will be created there, the Coordination Council for Economic Development has approved credits for the project. However, Arrival does not specify the amount of these credits in the notification.


The company, which was founded in 2015, claims it will operate 1,000 micro-factories by 2026. Although the time between announcement and start of production will be around one year in the future, the expansion plan will soon have to be extended. Another location could be in Russia, according to rumors: As the specialist portal Sustainable Bus writes, referring to the Russian Ministry of Transport, Arrival should consider a production site near Moscow, probably also for the electric bus. The company has not yet confirmed this information.

A few days ago, Arrival also presented the beta prototype of its electric transporter. The vehicle is visually very different from the design of the van shown in January (when UPS ordered it). The windshield is now much flatter and the wheelbase looks longer. All in all, the vehicle looks a bit more conventional and closer to a class-customary Daimler Sprinter than to the Alpha prototype.

“Through a lot of the learnings that we got back through our partnerships with some of the logistics companies, and we include UPS with that obviously, we’ve taken that and fed it to what has now become the Beta prototype,” says design chief Jeremy Offer. “The differences in the functionality and the user experience have led into some fairly substantial design changes, primarily around ingress and egress.”

Arrival wants to offer battery packs between 44 and 130 kWh for the electric transporter. With the largest possible battery, the range should be over 100 miles (approx. 160 kilometres), even with a full charge and frequent starts. A battery pack with 44 kWh initially appears very small for a vehicle of this type. Still, in some large cities, delivery vehicles only cover 20 to 30 kilometres on their delivery route before they arrive back at the depot. A transporter with such a battery would be more or less tied to a purpose, but it would not drive an expensive and heavy battery through the area that is never used anyway.