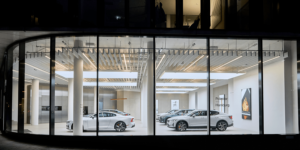 Electric car brand Polestar will enter nine new markets later this year, doubling its presence to 18 markets worldwide. By the end of the year, the number of brick and mortar locations worldwide is also expected to double to around 100.

The company does not specify which countries Polestar intends to expand into in its statement. Instead, the Swedish company went into more detail about their retail approach. Accordingly, the ‘Polestar Spaces’ that have been set up in many places to date – typically in city centres – are to be joined by so-called ‘Polestar Destinations’. The company wants to locate these at larger, easily accessible locations outside the city. While both types of facilities are intended to introduce customers to the vehicles and arrange test drives (configuration and purchase are carried out independently and purely online), the ‘Polestar Destinations’ will in future also handle vehicle handovers to end consumers.

“We are expanding both within markets in which we already have a presence and into new markets extremely rapidly. As a brand that has only been fully operational for just over 12 months, this sort of footprint is unprecedented,” expressed Thomas Ingenlath, CEO of Polestar. “We aim to expand at a similar rate in terms of new markets in 2022 as well.” The new ‘Destinations’ concept fits particularly well with some of the newer markets, he believes.

The brand’s physical presence is expected to grow to the said 100 or so locations worldwide. However, this number also includes some temporary pop-up locations. In addition, Polestar aims to have around 60 more test drive locations up and running worldwide by the end of the year and to expand the number of service points from 650 to 780.

Meanwhile, as reported, the German service network has been expanded to 125 partners after an initial addition of 61 service points in the spring of this year. At the service points, maintenance or repair work and, if necessary, software updates are carried out.

Polestar is owned by Volvo Car AB and the Zhejiang Geely Holding Group, which is also the 100 per cent owner of Volvo Car. The company is based in Gothenburg, but all vehicles are built in China. With the Polestar 2 sedan, the manufacturer has developed a much acclaimed electric car. Our sister publication electrive.net has already untertaken two road tests with the Polestar 2. The first time was in the summer of 2020 (in German), before the start of delivery, and the second time was at the beginning of the year for a winter check (also in German). The impressions differed considerably.

Tesla reports more than $1 billion in net income in Q2