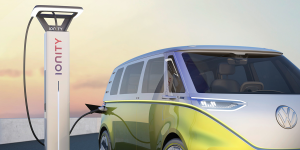 Volkswagen could bring the production version of the ID. Buzz in three different versions, according to a media report. There are also supposed to be regional differences.

The cargo version is likely to be the vehicle of which prototype photos appeared on the Internet in June: As is typical for vans, there are no windows from the B-pillar onwards, the load compartment has solid walls and a sliding door on the passenger side.

According to media reports, there will only be a long-wheelbase version in the USA, but it is not known whether this will be exactly the same as the long-wheelbase version in the EU or whether it will be a different, third dimension. The US version will also initially be offered primarily for ridesharing services. However, Automotive News wrote that the US version will only have four seats for passengers.

There is no confirmation yet on the possible battery sizes of the ID. Buzz – this also applies to the information in Automotive News about the versions and seat configurations. Volkswagen’s MEB can map batteries between 45 and 111 kWh – it was already assumed when the study was presented that the ID. Buzz could be the first model to get the largest possible battery. However, for the cargo version, which is used in inner-city trade and delivery applications, a significantly smaller battery is likely to be used for cost reasons.

The concept of the ID. Buzz had the 111 kWh battery and two electric motors. The system output was 275 kW, the range over 600 kilometres – albeit still according to NEDC.

As VW technical director Thomas Schmall indicated last week, the ID. Buzz will be launched in Europe in the third quarter of 2022. The US version is also planned for 2022.