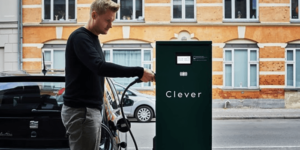 In fact, the Compleo-Clever relationship reaches back to 2013. Clever claims it provides almost 60 per cent of the charging infrastructure in Denmark, with 40 per cent of this share supplied by Compleo. “Through the cooperation with Clever, we contribute to a significant share of the Danish charging infrastructure. Large order volumes are also a reflection of the market growth in Denmark as well as across Europe – a promising sign for the future,” said Checrallah Kachouh, Co-CEO and CTO at Compleo.

They also share a common partner in E.On. Clever and the German utility are building 48 ultra-fast charging stations for electric cars on motorways in Denmark, Norway, and Sweden through Ultra Fast Charging Venture Scandinavia, a 50:50 joint venture.

Compleo, on the other hand, is reportedly negotiating a take-over of Innogy mobility solutions from E.On. A letter of intent for the acquisition of 100 per cent of the shares has already been concluded.

Compleo considers the deal a win-win as E.On relies on integrated customer solutions. In contrast, Innogy develops and produces hardware and software for charging and is thus much closer to the business model of Compleo Charging Solutions AG. Should the takeover take place, Compleo says it intends to take over all employees and customer relationships.

“We are confident about the prospect of growing together with a very experienced and long-standing market player such as innogy eMobility Solutions GmbH,” says Georg Griesemann, Co-CEO of Compleo Charging Solutions AG. “We value the company’s employees as proven experts in the technological field as well as in the European e-mobility market.”

Following the purchase of wallbe GmbH in spring, the combination with another strong player such as innogy eMobility Solutions GmbH expands Compleo to become a leading player in the German e-mobility market and beyond. “With our organic and inorganic growth, we are investing in our future as the German driver for electromobility in Europe and optimising our international market position,” Griesemann said.