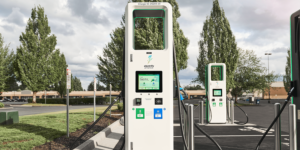 Volkswagen subsidiary Electrify America appears to be dropping the CHAdeMO charging standard at its North American facilities. The decision was found buried in the company’s investment plan that will enter its third phase in 2022 but will exclude California.

The decision is not entirely surprising, the latest since Nissan decided to phase out the Japanese charging standard by introducing the new Ariya SUV in Europe and the United States. Inside EVs uncovered the information on page 46 of Electrify America’s Cycle 3 ZEV National Investment Plan, where the company explains it will no longer install CHAdeMO connectors on its charging stations, beginning in January 2022.

California will remain the exception, also due to CARB not allowing Electrify America to take that decision. Volkswagen had set up the subsidiary to install charging infrastructure across North America following the diesel-gate ruling. The company is charged to invest two billion dollars in charging infrastructure in four phases.

The new CCS1 adapter for Tesla vehicles was cited as another reason why CHAdeMO was no longer needed on its sites. Since a CCS adapter is now available, Tesla owners no longer need to use a CHAdeMO adapter to charge on DC stations. It’s rumoured that soon Tesla will also be releasing its own CCS adapter for the North American market and also open its sites to third parties as reported.