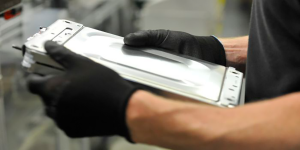 The new plant is to be built in Ibaraki prefecture north of Tokyo, according to Bloomberg, with an initial investment of 50 billion yen ($456 million / €384 million) and an annual production capacity of six gigawatt-hours in 2023. The plans seen by the news agency include spending as much as 100 billion yen and boosting output to 18 gigawatt-hours after about five years. That’s roughly enough for 163,000 Nissan Leaf electric vehicles, says Bloomberg and the news follows earlier reports from May this year.

Nissan seeks to keep closer tabs on battery development and ensure access to the critical EV component, Bloomberg reports, pointing to Nissan possibly wanting to increase its stake or deepen its alliance with Envision AESC. Nissan had sold its battery subsidiary AESC to Envision Group in 2018 but still holds a minority stake.

Now trading as Envision AESC, this new plant is the third announcement of working with the Renault-Nissan-Mitsubishi alliance in recent months. Renault in June confirmed plans to install a ‘Gigafactory’ at its plant in French Douai with the help of the Chinese battery maker. The plan is for a total capacity of 43 GWh by 2030, of which Renault is to purchase 24 GWh and use the batteries from Douai in the future in the electric R5, among other vehicles.

Then in July, Nissan officially confirmed that Envision AESC will build a battery factory at its plant in Sunderland, England. The battery factory in the UK will be larger than the just-announced factory in Ibaraki. In Sunderland, Nissan and Envision AESC aim for an initial annual capacity of 9 GWh and grow to 25 GWh by 2030. Potentially, up to 35 GWh will be possible with batteries to be used in a new E-Crossover Nissan is to build next door based on the CMF EV platform from the alliance.

While the above cooperation benefits from close ties between AESC’s former owner Nissan, the new company also holds its own factories in Sunderland and Japan and the United States. According to the company, annual production capacity now totals 7.5 GWh – 3 GWh in the US state of Tennessee, 2.6 GWh in Kanagawa, Japan, and 1.9 GWh in Sunderland, UK. In addition, AESC Envision has begun construction of a plant in Wuxi, China, in 2019, which is expected to have an annual capacity of 20 GWh as reported.

Rio Tinto to mine lithium in Serbia