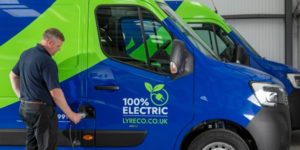 The Renault electric vans now being put into operation will not cover a lot of miles completing their delivery routes, but they will carry a significant amount of customer orders. With an average order weighs circa 40kg, Renault says that it was important for Lyreco to chose an electric van with a payload of over 1,000kg. With its 17 Master E-Tech vans, Lyreco has chosen long wheelbase and medium wheelbase formats that have a payload of 1,300kg and 1,381kg, respectively. The Master E-Tech has a range of up to 75 miles (120 kilometres) on a single charge (WLTP).

Lyreco has a presence in 25 countries in Europe and Asia. Distribution makes up 44 per cent of Lyreco’s total carbon footprint emissions. Electrifying its fleets is clearly a key element in Lyreco’s strategy to achieve carbon neutrality by 2030.

Renault looks to do well as a result of the company’s sustainability commitments since 75 per cent of vehicles rated at 3.5t in the company’s 250-strong nationwide delivery fleet are produced by Renault. Neither company has revealed how quickly and in what numbers the Lyreco’s fleets are to be electrified.

Richard Taylor, Head of Operations – Supply Chain, Lyreco UK & Ireland, said: “Electric vans are currently the leading sustainable solution for our future operations and while the technology has been available for a couple of years, introducing any into our fleet before now would have been detrimental to our customer experience – the range and payload were simply not there,” explains Taylor. “Making the transition to EVs had to work in every aspect and the Master E-Tech now ticks all the boxes. While we considered several different vans, it was also reassuring that we would be exploring such an important move into electrification with a brand that was a known quantity to us.”

In 2020, Lyreco put sustainability at the forefront its operations with a commitment to reducing its CO2 output with science-based targets. Lyreco is defining targets based on key performance indicators of the reduction of greenhouse gas emissions relating to Scope 1 (direct emissions) and Scope 2 (indirect energy emissions), as well as gas emissions relating to Scope 3 (other indirect emissions) that are under Lyreco’s control, namely business travels, waste and Lyreco branded products. Led by Lyreco Scandinavian subsidiary, the company expects the first results of this initiative by September 2021.

Lyreco UK & Ireland has invested £2.3million in the expansion of its electric fleet of vans, taking its number of electric delivery vehicles from 17 to 67. 50 new Ford E-Transit electric vans have been purchased to join Lyreco’s current BEV fleet of 17 Renault Master EVs.

The company adds that the new additions to their fleet feature higher ranges and load capacities, “which has allowed us to utilise EV technology on a much wider range of its deliveries than before”. Charging of the vehicles will be done by at their site in Telford, where the company has installed their own solar-panel-powered charging stations. Plans are also already in place to install chargers t the rest of Lyreco’s sites next year.

For long-term plans, Lyreco aims to become completely carbon-neutral by 2030, as well as having subscribed to the ‘Clean Van Commitment’, which asks its pledges to move to emissions-free vans by 2028.

“The acceleration to electrify our fleet has been driven by our desire to embrace sustainable change and demonstrate commitment to moving away from diesel. In making this significant investment to our infrastructure we are playing an active role in reducing the environmental impact of delivery transport while safeguarding the planet, our customers, and our business,” explained Peter Gojka, Building Services Manager, Lyreco UK & Ireland.