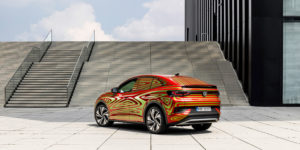 Volkswagen says it will put the VW ID.5 GTX on display at the IAA Munich Motor Show this September. The new e-car is the first to utilise the Group’s MEB platform in the form of an SUV coupé and will appear as a near-production concept at the show before going on sale next year.

Details remain scarce, although it is not the first time we hear of VW teasing the ID.5 GTX. As expected, the e-SUV will feature an all-wheel drive with the 150 kW rear-motor likely being supported by 75 kW on the front axle. This results in 225 kW system power, a key pillar of Volkswagen’s MEB platform for electric cars.

VW, in the announcement, claims 497 kilometres of range but specifies no performance data other than “a large lithium-ion battery”. The company also expects the ID.5 GTX to drive fully connected, receive updates over-the-air and be fitted with Car2X technology.

When the ID.5 GTX arrives at dealerships next year, it will be the second model of the sporty GTX product brand after the ID.4 GTX. According to Volkswagen, the acronym stands for “a new athleticism.” The company states it continues the tradition of the successful GTI, GTD and GTE models and transfers it to the world of electric mobility. Plans for the electric GTX offshoots had been rumoured since 2019 as reported.

As for the ID.5 GTX, Volkswagen is otherwise only airing a few visual peculiarities at this stage. At the front, the model gets LED matrix headlights (“IQ.Light”), light strips running towards the Volkswagen logo and illuminated honeycomb elements on the driver and passenger sides. The sporty roofline is characterized by flat-sloping A-pillars set far forward and ends in an integrated rear spoiler. The most striking feature at the rear is the light strip.

The performance model obviously used the ID.5 as a base. The e-SUV is a coupe offshoot of the ID.4, built-in Zwickau and scheduled for market launch in the second half of 2021. The ID.5, too, has been in pre-production in Germany since the beginning of the year reportedly. The ID.5 will probably use the 77 kWh battery of the ID.4 and its 150 kW electric motor as set by the MEB.