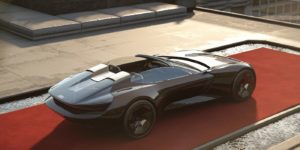 Audi has presented a study of an electric roadster called the Skysphere Concept. The electric cabrio will be on show at the IAA Mobility and is supposed to be a preview of future Audi design rather than for a concrete model. The new design is also accompanied by a special technical solution: a variable wheelbase.

Audi makes it clear that this design is “no longer just about driving”. The company says: “With the Skysphere Concept, the brand shows how it is redefining future luxury.” The vehicle is supposed to offer the occupants “fascinating and high-class experiences”.

To enhance the experience in the two main applications of a large convertible, Audi has designed a variable wheelbase solution. Wheelbase and exterior length can be varied by 25 centimetres using electric motors and a “sophisticated mechanism with body and frame components that can be moved into one another”, while at the same time the ground clearance is changed by up to ten millimetres – sometimes for more dynamics, sometimes for more comfort.

In ‘Sports’ mode, it is not only the engine response and the suspension tuning that changes as is usually the case. The Skysphere Concept is then 4.94 metres long, yet the rear-wheel steering is supposed to provide “excellent agility”, according to Audi. In this driving mode, the driver steers themselves.

However, if the driver wants a particularly comfortable experience, they can switch to ‘Grand Touring’ mode. The mechanism then extends the car to 5.19 metres, raises the chassis by the aforementioned ten millimetres and the car takes the wheel itself. The steering wheel and pedals move into an “invisible range” to further enhance the sense of space.

In the GT mode, Audi promises that up to 500 kilometres of range should be possible according to WLTP. The “more than 80 kWh” battery is not placed in the underbody because of the wheelbase mechanics, but mainly behind the cabin. Some of the modules also sit between the seats under the centre tunnel.

The German carmakers do not specify the range in ‘Sports’ mode. It is likely to depend very much on how often the driver uses the full 465 kW of the rear engine. In the old world, the 632 hp electric motor accelerates the 1.8-tonne convertible to 100 km/h in four seconds. The Skysphere Concept does not have an all-wheel-drive; components such as the charger and the DC/DC converter are installed under the front bonnet along with the mechanics for the variable wheelbase.

The idea of a variable wheelbase is not new; Renault presented the Morphoz concept in spring 2020. At the push of a button, the SUV could increase in length by 40 centimetres to create space for additional batteries. In the city mode with a length of 4.40 metres, 40 kWh are installed; for the long haul, another 50 kWh can be accommodated in the then 4.80-metre-long car, at least that is the concept.

Instead of mapping the two cases of city and long-distance, Audi has concentrated on the contrasts of sport and comfort in its luxury study. Important to the carmakers were the spaces surrounding the passengers – in other words, their “sphere”. Audi plans to show a total of three such concept studies, in addition to the Skysphere, also the Grandsphere, and the Urbansphere. All of them are designed for automated driving according to Level 4 and are thus intended to demonstrate new possible applications for vehicles while the electric drive is a given in all three studies.

The design of the Skysphere takes up a number of elements typical of the brand, including the large single frame at the front – even if Audi itself admits that it “no longer has the function of the radiator grille”. The front and rear are also dominated by larger LED surfaces, in white at the front and red at the rear.

The major changes, however, are to be found in the interior. “What is new is a design that sees the interior, the passenger compartment, as the centre and that no longer subordinates the occupants’ experience to the requirements of the technology,” says Audi. Instead of following specifications such as steering wheel, pedals, gearstick lever and gimbal tunnel, the designers want to use the freedom that automated electric drives allow.

The Audi Skysphere Concept will be officially shown for the first time on 13 August at the Monterey Car Week in Pebble Beach, California. The German carmakers have already shown the PB18 e-tron sports car concept with a solid-state battery there in 2018. In September, the vehicle will also be on display at the IAA Mobility in Munich.

BMW updates the iX3 with a facelift