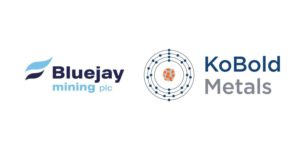 The agreement will see Kobold acquire 51 per cent of Bluejay’s Disko-Nuussuaq licence holdings through a two-stage earn-in commitment. The company is to discover and develop “sources of critical materials” for electric vehicles, using technology that includes machine learning.

“This agreement provides the company’s Disko-Nuussuaq nickel, copper, cobalt and platinum massive sulphide project in central-west Greenland with a globally significant partner,” Bluejay wrote. Kobold CEO Kurt House added: “The Disko region has seen the rare convergence of events in earth’s history that could have resulted in forming a world-class battery metal deposit.”

Specifically, the deal calls for the “geological and geophysical assessment of Disko-Nuussuaq” by Kobold in a first phase of the venture to identify locations of test drilling. Funding for this is stated at $3.4 million until 31 December 2022, to be borne by Kobold. For the second phase, set to run until the end of 2024, Kobold is expected to drill the equivalent of $11.6 million or 15 pre-agreed wells within the Disko licence area.

Bluejay will retain a 49 per cent interest. The company will manage the field operations until 2024 and is expected to fund its pro-rata obligation after the second phase. If Kobold completes the work in the first phase but fails to meet the drilling commitment in the second phase as planned, two per cent JV company interest will revert to Bluejay and with it control, it added.

Bluejay has several projects in Greenland and Finland. The Disko-Nuussuaq project covers an area of 2,897 square kilometres in West Greenland, where Bluejay holds several licences. In the announcement, the company refers to past surveys that “all indicate globally significant metal deposits”.

ADS-TEC to hit the US stock exchange via SPAC merger