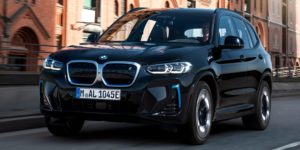 Shortly after the market launch of the iX3, BMW has announced a facelift for the electric SUV. The model update only affects the appearance and the interior, there are no changes to the drive. The revised model will be launched in Europe in autumn.

The very soft model update of the iX3 was already announced for June when BMW  presented the ‘Life Cycle Impulse’ (LCI), as the facelift is called in brand jargon, for the X3 generation built since 2017; after four years of construction, a visual and technical modernisation is not unusual. In June, however, there was only talk of the combustion engine and the PHEV variants presented in 2019, but not of the electric variant iX3, which has been in series production in China since 2020.

BMW is now making up for that: The iX3 is also getting the facelift, albeit only in terms of looks and interior. At the front, the facelift model stands out primarily due to the narrower headlights and the more strikingly drawn air intakes in the lower area of the bumper. The defining (and in the case of the iX3 almost closed) BMW kidney is only minimally larger.

At the rear, the facelift model is easier to recognise, with the more angular rear light design standing out. As with most mid-cycle revisions, changes to sheet metal parts are minimal for cost reasons, so apart from the rear light graphics, only plastic parts have been adapted: The rear bumper has been revised in the style of the front air intakes, and the implied diffuser element has been redesigned. However, the (optional) blue-anodised accents, which are supposed to distinguish the iX3 from its combustion engine colleagues, have remained.

The changes to the interior are more extensive: There is, for example, a new steering wheel, a larger infotainment display, the more intelligent iDrive with BMW Operating System 7, a new arrangement of air vents and controls in the dashboard and a redesigned centre console. Although the storage compartment with iX3 lettering remains, a newly designed control unit is installed behind it: The gear selector and iDrive controller have been redesigned, and the start button is now located there – before the facelift, the start button was still at the top of the dashboard.

As mentioned, the drive technology of the iX3 remains unchanged with the 210 kW electric motor in the rear, the 80 kWh lithium-ion battery in the underbody (74 kWh of which can be used) and the maximum DC charging power of 150 kW. The standard charging process from 10 to 80 per cent is said to take 32 minutes. Charging power of more than 200 kW, as in the i4 electric sedan, is therefore not available after the facelift. On the AC side, the three-phase 11 kW charger remains in place; a complete charging process to 100 per cent takes 7.5 hours.

BMW gives a WLTP range of up to 460 kilometres; before the facelift, this value was between 450 and 458 kilometres, depending on the equipment – the WLTP consumption, on the other hand, is the same at 18.6 to 19.0 kWh/100km. This also means that the range and consumption figures that electrive author Christoph M. Schwarzer determined in his test of the iX3 will also apply to the facelifted model.

The dimensions of the body remain the same to the millimetre (4,734 / 1,891 / 1,668 millimetres in length, width and height) despite the modified bumpers, and the wheelbase also remains unchanged at 2.86 metres. The luggage compartment volume is between 510 and 1,560 litres, and a roof load of up to 100 kilograms is permitted. The towing capacity remains at 750 kilograms after the facelift, whether braked or unbraked (75 kilograms drawbar load). If you need more towing capacity with an electric BMW, you have to go for the i4 (up to 1,600 kilograms braked with 75 kilograms drawbar load) or iX (2,500 kilograms braked).

BMW will present the revised iX3 at the IAA Mobility in Munich at the beginning of September. The vehicle will continue to be manufactured only by BMW Brilliance in Shenyang, China. In Germany, the base price is 67,300 euros including VAT. This makes the Facelist-iX3 exactly 1,000 euros more expensive than the previous model, but it also includes the M-Sport package, which was previously an extra charge, as standard. After deducting the German innovation premium of 7,975 euros, the price for the customer is 59,325 euros.