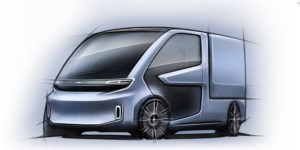 Cornwall, UK-based Watt Electric Vehicle Company (WEVC) has unveiled plans to build up to 5,000 electric-powered commercial vehicles per year from 2023. The vehicles will be produced on the PACES modular EV platform, which the company sees as the basis for future electric vans, trucks and buses.

The commercial vehicles will be built at a new plant in the Midlands from the third quarter of 2023, the company announced in a press release. Details such as pricing have not yet been released.

For production, the company is using the PACES (Passenger And Commercial EV Skateboard) platform, which WEVC says is flexible, scalable, lightweight and cost-effective and can be used for almost any size or shape of electric vehicle. All ISO regulations and European standards for small series type approval would be met.

The platform is intended as the basis for customised vans, trucks and buses for the last mile. The company plans to unveil the first prototype of an electric user vehicle based on PACES in the first quarter of 2022. The project is funded by Innovate UK.

In addition to the existing plant in the Midlands, WEVC is planning a new EV factory in Cornwall, which will produce sports cars and electric vehicles from other brands. The plant is due to be built in 2023.