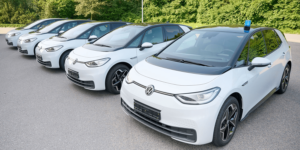 According to Volkswagen, the Lower Saxony police force is the first authority in Germany to use purely electric vehicles “on this scale”. The order was preceded by a Europe-wide tender.

“This decision in favour of Volkswagen is significant and can serve as a model for other authorities in Germany and beyond,” said Holger B. Santel, Head of Volkswagen Germany. “We have a strong offer and hope that other authorities in Germany and Europe will also increasingly rely on e-mobility in the near future.” VW further states that the Vienna police, for example, are currently testing the ID.3 as well as the ID.4.

The ID.3 is to be used by the Lower Saxony police as a neutral vehicle without the usual police look. An unspecified number will be used as emergency vehicles by the criminal investigation department. These ID.3s are equipped with a radio and a blue light that can be mounted on the roof of the vehicle in case of emergency. The first ten ID.3s have already been handed over to the police at a press event. VW does not specify when the other 205 vehicles will be delivered.

Some of the 175 Passat GTEs will also be delivered to the police and will therefore remain in a neutral look. However, some of the plug-in hybrids will also be used for patrol duties and will therefore have the full conversion with permanently mounted signalling equipment, additional blue light LEDs in the radiator grille and the corresponding foiling. Such vehicles are already in use in the German state of Lower Saxony: for example, the Lüneburg police department flew in 24 Passat GTEs in October 2020.

In cooperation with the Lower Saxony Police, the Technical University of Braunschweig and the Lower Saxony Research Centre for Vehicle Technology (NFF) have researched how electric cars can be used in everyday police operations. The results of the multi-year research project “Silent&Ready” have led to a new guide.