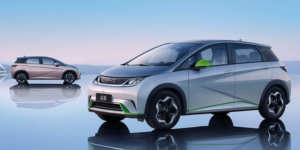 BYD has started pre-selling its Dolphin compact electric vehicle in China, which is based on the new ‘e-platform 3.0’ with Blade batteries. The technical data and prices are now known.

While the base model has a battery of only 30.7 kWh (for 301 NEDC kilometres), BYD installs a 44.9 kWh power storage unit in the other three versions. This is supposed to be enough for an NEDC range of 405 kilometres. In all cases, the battery is BYD’s own Blade battery, an LFP battery with very large cells that are installed directly in the battery pack without an intermediate step via the modules.

What stands out when looking at the technical data is the maximum DC charging power of 60 kW for the large battery, the 30.7 kWh battery can be charged with a maximum of 40 kW. BYD’s e-platform 3.0 is designed as an 800-volt platform. This allows BYD to realise smaller cable cross-sections. However, the Chinese company is unable to exploit the often-cited advantage of higher charging power, possibly because the relatively small LFP batteries limit the maximum charging power.

In both cases, the charging process from 30 to 80 per cent should take around 30 minutes. The AC charging power is a maximum of 7 kW. The 70 kW variants can travel at a maximum speed of 150 km/h, the top model with 130 kW can do ten km/h more. Both drives are PSMs mounted on the front axle.

The Dolphin has a wheelbase of 2.70 metres, which is a lot for its overall length of 4.07 to 4.15 metres. Apparently, the three variants of the Dolphin each have adapted bumpers, because they are listed as 4.07 metres, 4.13 metres and 4.15 metres in length. Width (1.77 metres) and height (1.57 metres) are the same for all variants, and all models are also equipped with a heat pump.