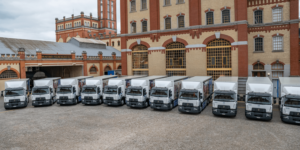 The 26-ton electric trucks are the world’s first series-produced electric trucks from Renault Trucks. “We want to bring our beers and beverages to our customers in the most environmentally friendly way possible,” affirms Thomas Stalder, Head of Logistics at Feldschlösschen. “Within our two-tier distribution network, these emission-free, quiet and energy-efficient e-trucks play a central role,” Stalder added.

The vehicles have a net payload of 13,800 kg and a range of up to 200 km. For Felschlösschen, Renault optimised the D Wide Z.E. for brewery logistics starting in February 2020. The models each have two electric motors onboard, offering a total output of 370 kW or a constant output of 260 kW and 850 Nm. A battery pack with a capacity of 200 kWh stores energy and can fully charge in one to two hours via CCS with 150 kW charging capacity.

Feldschlösschen has deployed the e-trucks at twelve logistics sites that distribute beverages and make up the Swiss site of the Carlsberg Group. Transport from the production to the depots and the distribution centres of major customers is 60 per cent by rail.

Feldschlösschen stresses that climate-friendly transport along the entire supply chain is becoming a decisive factor among its 25,000 clients. An internal survey this summer saw about 17% of customers already opting for carbon-neutral delivery through Feldschlösschen and 34% intending to use it in the near future.

The new electric trucks are charged with renewable energy. The brewery says it has five photovoltaic systems at the Rheinfelden, Satigny and Givisiez sites, among others, to do so. This increases the positive CO2 balance of the beverage deliveries.

Apart from the heavy-duty Renault electric trucks, Feldschlösschen says it has been using smaller electric trucks for beverage transport since 2008, making it one of the pioneers in Switzerland. The company intends to transform its entire truck fleet to electric in the mid-term.