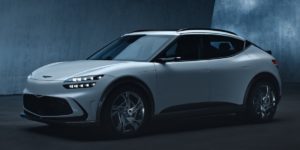 The Hyundai brand Genesis has presented new plans for the electrification of its entire vehicle range. According to these plans, all new models are to be powered purely by electricity from 2025, with the last combustion engine to be sold by 2030 at the latest.

For 2030, Genesis aims to “become a 100 per cent zero-emission vehicle brand”, according to the statement. By 2035, the company should then be completely CO2-neutral – i.e. also in the production and operation of all sites.

The luxury brand of the Korean Hyundai Motor Group is currently working on its European launch, among other things, but for the time being still with combustion models – such as an SUV and the large G80 sedan. From the end of 2021, three pure electric vehicles are to follow. Among them is the BEV version of the G80, the e-GMP battery-electric vehicle GV60 and another model on a mixed platform.

As Euisun Chung, Chairman of Hyundai Motor Group, states in the now released “vision statement film”, Genesis has had an “intense, courageous and successful journey and has successfully established itself as a truly global luxury brand”. “Genesis is once again the starting point of another bold journey – the journey to a sustainable future,” Euisun Chung continues.

In concrete terms, this means that all new vehicles of the brand will be powered purely by electricity from 2025. Like its parent Hyundai, Genesis is also focusing on a dual electrification strategy with batteries and fuel cells. “Genesis will strive to develop all-electric technologies, such as new fuel cell systems with higher performance and electric systems that help improve efficiency,” the statement said. “In addition, Genesis will dedicate itself to developing next-generation technologies that draw better performance and efficiency from lithium-ion batteries.”

According to the statement, the future vehicle range will consist of eight models, with a global sales target of 400,000 units by 2030. Genesis has not yet specified how many of the eight models will be battery-electric and how many will have a fuel cell. It is also not known when the first Genesis fuel cell car will be launched. Hyundai currently offers an H2 SUV with the Nexo.

Opel to release the Astra as a BEV

Tesla postpones the Roadster 2 until 2023