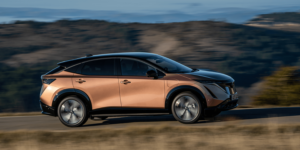 Nissan opened the order books for its all-electric crossover model Ariya in Norway on 9 September. All other European countries are to follow “in the coming months”. Deliveries are scheduled to start in summer 2022.

“Nissan has led electrification for over 10 years, and we can’t wait to get customers behind the wheels of our highly anticipated Ariya,” says Leon Dorssers, Regional Senior Vice President Marketing and Sales for Nissan in the AMIEO region. No wonder the model continues to be a long time coming.

When the Ariya was first unveiled in July last year, Nissan had announced that it would be on the market in mid-2021. This was followed in June this year by news that the launch of the electric vehicle model would be delayed by several months due to the ongoing chip shortage and would only be available in Japan from “this winter”. “A year ago, we announced that we were targeting the middle of this year, but after that, Covid-19 has taken longer than we expected, and there is the problem of semiconductor shortage,” Nissan manager Asako Hoshino told Bloomberg in June.

At the time, it also said reservations for the Ariya would be available in Europe, the US and China “later this year”. Nissan also did not reveal in June when deliveries to export markets would start. But now it is clear that the pre-sales phase for the Japanese electric car will start next week, first in Norway. The pre-sales phase will start “in the coming months” in all other European countries” without being specific. However, the Japanese company has not yet mentioned prices. Delivery of the first vehicles will then take place simultaneously throughout Europe in the summer of 2022.

With the launch of the pre-sales phase for its all-electric crossover model Ariya in Norway, Nissan has now also published the prices. The Ariya is available in Norway from 409,900 kroner (around 40,000 euros). The basic version is available with front-wheel drive and a 63 kWh battery. Nissan claims a range of 360 km for the entry model.

The Nissan Ariya is the first EV utilising a new platform which sets Nissan in the lead in the C-Segment within the alliance with Renault and Mitsubishi. When debuting the model in July 2020, the positioning in Europe also meant Nissan was moving away from a previous strategy that considered Europe the future territory of Renault.

The Ariya EV uses an EV-only platform rather than taking a multi-energy approach such as PSA, for example. Nissan product developer Marco Fioravanti told electrive at the time that a dedicated platform allowed Nissan to take the customer approach and push the wheelbase to an extreme level.

Mercedes presents the EQE ahead of the IAA